From Zelda Dungeon Wiki
Jump to navigation Jump to search
Want an adless experience? Log in or Create an account.
Link 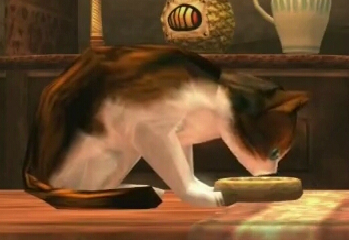 Link is the name of Sera's cat in Twilight Princess. Since he is owned by Sera, he lives with her in Sera's Sundries. However, he is allowed to leave via through a small door. Sera's cat seems to be very important, as Sera herself gets very upset when he runs away. Sera also has a couple of framed pictures of him within the shop.

During the prologue of the game, Link is tasked with finding Sera's cat, as he has gone missing. He had previously went missing due to Sera scolding him for eating a Fish, which was meant for the family's dinner. Sera's cat is found hanging out around the small pond at the back of Jaggle's House. He is very shy and if Link goes near him, he runs away. Link must obtain the Fishing Rod to be able to catch a fish in the small pond. If Link is able to catch a fish near enough to Sera's cat, he takes it from Link and runs back to Sera. Now him and Sera are happily reunited and Sera gifts Link with a Bottle filled with Milk.

After Link has escaped his imprisonment in Hyrule Castle, he is tasked with returning to Ordon Village. Midna tasks Link with retrieving the Ordon Sword and Shield. Link now in Wolf form has the ability to interact with animals. If Wolf Link talks to Sera's cat, he tells him that he is no match for the Hawk. He also tells Link that he can prevent Hanch from using the Hawk by sneaking up on him.