From Zelda Dungeon Wiki
Jump to navigation Jump to search
Want an adless experience? Log in or Create an account.
Ordon Target Practice 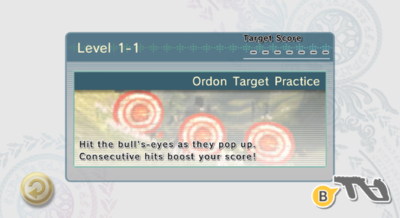 "Hit the bull's-eyes as they pop up. Consecutive hits boost your score!"

Ordon Target Practice is the first stage of the first level of Link's Crossbow Training. 60 seconds long, with 20 seconds for each of the three sections, it is set in Ordon Village from Twilight Princess. The music that plays during this stage is the Goron theme from Twilight Princess, despite being set in Ordon Village. If Link can shoot all the targets in the bull's-eye and reach the maximum score multiplier, one could get up to 38,340 points in this stage, plus additional miscellaneous points from rocks, signs, pots, etc.

This stage is broken up into three sections, all of which are presented in a first-person perspective. 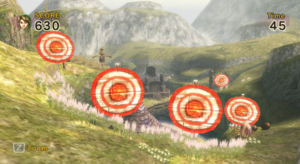 The first section has Link standing on one of the hills along the side of Ordon Village. From this height, Link can see Mayor Bo's House and the entrance to the Ordon Ranch. In total, there are eleven normal targets and one special target to aim for. Additionally, there is a sign, a scarecrow, and multiple rocks in which Link can hit for points. If Link can successfully hit every target and get maximum points from the scarecrow, one could get up to 4,616 points in this section alone, not including other miscellaneous points Link can accumulate from shooting rocks, signs, etc. 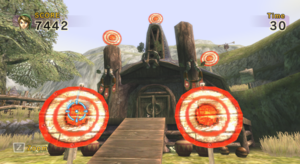 The second section of the Ordon Target Practice has Link standing directly in front of Mayor Bo's house. The targets will appear on the deck and roof of the house, along with beside the fence that is to the left of the house. In total, there are fifteen normal targets and one special target to aim for. Furthermore, there are numerous pots, signs, and rocks which will yield additional points. Inside one of the pots lies an Orange Rupee, which can be shot for points, which range from 1000 to 100, depending on how quickly Link shot it after it was revealed. If Link has accumulated a score multiplier of twelve from the previous section, this section could yield up to 13,200 points if Link successfully shoots every target. Additional points can be acquired by shooting other miscellaneous items around the area. 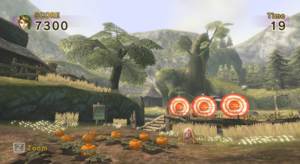 The standard final section of the Ordon Target Practice takes place place with Link's back to Jaggle's House. The player can see Mayor Bo's House to the far left behind the mesa, and on the other there is a view of the plain of the village. There is a pumpkin patch at Link's feet, and each pumpkin will yield five points. There are a total of fourteen normal targets and one special target for players to aim for. There are also numerous signs, rocks which can be shot for additional points. However, shooting the cucco wandering around loses Link 100 points, and cancels his multiplier.

If Link has maintained a 28 times multiplier from the previous two sections, one could acquire up to 21,360 points, plus any points acquired from shooting miscellaneous items. 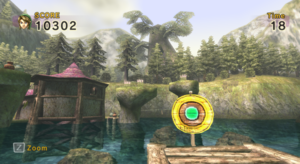 There is also an alternative third section to this stage. It is accessed by first, in the initial section, shooting the scarecrow's body eight times to maximise the head size, and then shooting the head. If this is done, the second section will also feature a scarecrow, when it otherwise does not. If Link can successfully shoot the body of this scarecrow eight times, and then shoot the head, Link will do the alternative third section instead of the normal one.

he alternative third section takes place behind Jaggle's house, facing the small pond of water and to the left Sera's Sundries. This section has 21 targets to shoot, ten of which are normal targets and eleven of which are special targets. Because of the high number of special targets, it is very easy to rack up points. If Link successfully maintained the maximum multiplier from the first two sections, one could score up to 76,530 points if they hit every target in the bull's-eye and maintain the multiplier in this section alone.