From Zelda Dungeon Wiki
Jump to navigation Jump to search
Want an adless experience? Log in or Create an account.
Gerudo Mesa 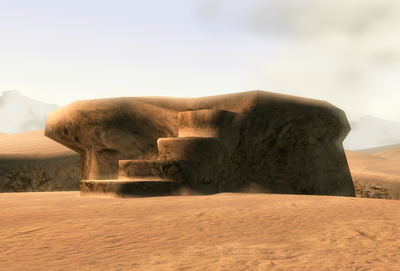 The Gerudo Mesa is a location that appears in Twilight Princess. It is located in the far southeast (Wii) of the Gerudo Desert. It is a very small mesa, with table-shaped 3D figures stacked up top of each other. Link can climb up the mesa via a combination of trees and Peahats that he can Clawshot to.

Even though this area is relatively small, it is home to quite a few points of interest and is actually vital to advancing the game later on.

The first time Link makes his way to the top of the Gerudo Mesa, he is ambushed by Shadow Beasts. Defeating them results in a Twilight Portal being created there, allowing Midna to warp link to the Mesa at any point.

At the top of the Gerudo Mesa at night, Link finds an Imp Poe beside the broken bridge. He can then transform into a Wolf, thanks to the Shadow Crystal, and kill it. With the Poe dead, Link can rip out its Soul, and keep it for Jovani.

The first time Link wanders to the Gerudo Mesa, he spots the broken piece of the Bridge of Eldin sticking out of the top of the mesa. Midna can warp the piece back to the broken bridge, thus allowing Link opportunity to cross the bridge, whereas before he could not.

The fifty-floor optional dungeon, the Cave of Ordeals, can be found atop the Gerudo Mesa. After having moved the Bridge of Eldin, Link finds an entrance to an underground cavern. After getting through all fifty-floors that are filled with enemies, Link meets up with the sole Great Fairy found in the game, and as a reward she gives Link the Great Fairy's Tears.