From Zelda Dungeon Wiki
Jump to navigation Jump to search
Want an adless experience? Log in or Create an account.
Sanctuary 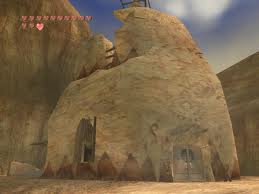 The Sanctuary is a location that appears in Twilight Princess. It is situated within Kakariko Village in the second province of the game, Eldin. It is the home of the village's shaman, Renado, and his daughter, Luda. Within the events of the game, the Sanctuary serves as the resting place for Colin, Talo, Malo, and Beth. The Sanctuary consists of one large main floor, however, beneath a secret passage lies a much larger cellar.

Link first encounters this location when on his quest to restore the light to Eldin Province, which is currently shrouded in Twilight. After conversing with the Light Spirit, Eldin, Link learns that he must once again collect the Tears of Light that are scattered throughout the province. Link, now suspended in Wolf form, enters the inside of the Sanctuary as this is where Youths' Scent trail ends. Inside, Link finds the petrified spirits of his childhood friends from Ordon as well as Renado, his daughter, and Barnes. Wolf Link must light all the torches within the main room, which opens a hidden path leading into the Sanctuary's cellar. Here, the young hero can defeat the Shadow Insects and obtain a total of three Tears of Light.

Link must revisit this location later in the plot. Link initially visits to confront Shad, who is investigating the cellar on the possibility that it may be linked to the sky, the hero's next destination. Renado soon hands Link a letter that must be delivered to Telma, which contains valuable information regarding the restoration of Ilia's memory. After obtaining a Wooden Statue, which was previously owned by Ilia, Link returns to the Sanctuary to show it to her. Ilia suddenly remembers a brief part of her memory regarding an old woman who saved her from a pack of monsters in a place known as the Hidden Village. After conversing with the old woman, Impaz, Link obtains the Horse Call. After showing Ilia the item, she suddenly regains her full memory and thanks Link for all of his heroic efforts.

After learning some vital information from Ilia regarding Impaz, Link returns to the Hidden Village. After showing Impaz the Dominion Rod, it is revealed that Link is in fact the “Messenger to the Heavens” and she hands him the Ancient Sky Book to help the young hero on his quest. After returning to the Sanctuary, Link shows Shad the ancient book. Shad then begins to recite a spell of sorts, however, the book seems to be incomplete. Shad then marks the location of six Sky Characters that are scattered throughout Hyrule. After obtaining all six of the characters, Shad successfully recites the spell and removes the seal on the Owl Statue. Link utilizes his Dominion Rod to move the statue and proceed into the secret room. Here, the young hero finds the Sky Cannon, which he later uses to reach the City in the Sky.