From Zelda Dungeon Wiki
Jump to navigation Jump to search
Want an adless experience? Log in or Create an account.
Owl Statue 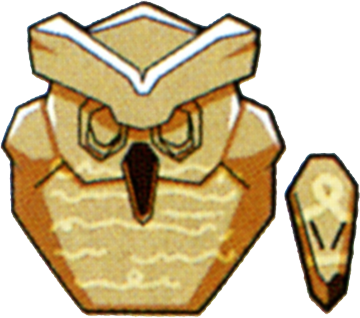 Artwork of the Owl Statue and Stone Beak from Link's Awakening.

Owl Statues are mysterious objects located in many of the different regions seen throughout the Zelda series. The statues serve different purposes in different games, and not much is known about their origins other than in Twilight Princess where it is said that the Oocca created them.

Owl Statues appear throughout the Overworld of Termina in Majora's Mask. Once Link hits an Owl Statue with a sword or Deku Stick it will be activated and serve as a warp point for the remainder of the game for use with the Song of Soaring. There are ten Owl Statues in Majora's Mask altogether.

In non-Japanese versions of Majora's Mask for Nintendo 64, the player can also save their progress at an Owl Statue as alternative to traveling back to the dawn of the first day; however, if the game is reset after saving at the Owl Statue, all progress made during that three day cycle will be lost.

In Majora's Mask 3D, Owl Statues are the primary way to save the game - resetting no longer wipes the save, and using the Song of Time no longer saves the game. Link also does not need to strike statues with his sword, simply checking them activates them.

While not known as Owl Statues, Owl Stones appear in both Oracle of Seasons and Oracle of Ages. Scattered across Holodrum and Labrynna, Owl Stones will give valuable advice to Link that will help with a nearby puzzle. Unlike Link's Awakening, Link will need to give the Owl Stone a Mystery Seed to make it speak.

Towards the end of Twilight Princess when Link is on his way to the City in the Sky he meets Shad who is researching about Sky Writing and Owl Statues. Link has to travel all across Hyrule to find the six Owl Statues that each hold one Sky Character that belongs to the Ancient Sky Book that Link previously had received from Impaz in the Hidden Village. Moving all the Owl Statues and collecting each Sky Character, Link will be able to move the statue that guards the Sky Cannon. In the entire game there are eleven Owl Statues in total.