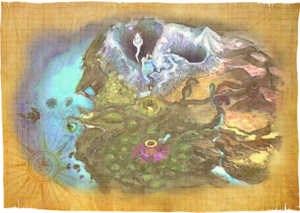 Termina is a parallel world to Hyrule. It is featured in Majora's Mask as the primary setting in the game. Termina contains many similar characters from Ocarina of Time, but they seem to have no connection to their doppelgangers in Hyrule. Link arrived in this parallel world by looking for his lost friend, which is believed to be Navi, and discovers that Termina is threatened to be destroyed by the Moon controlled by Majora's Mask. Clock Town resides at the land's center and serves as a hub for Link to find various activities. Termina consists of five major, geologically different regions. The swamp of Woodfall, icy peaks of Snowhead, dry canyons of Ikana, the tropical Great Bay, and the huge region connecting them all with Clock Town in its heart, Termina Field.

The Carnival of Time

Termina is an alternate reality to Hyrule. The people of Termina seem to have no recollection of a royal family, and many traditions in Hyrule don't seem to be celebrated or recognized at all. No one in Termina mentions the Goddesses Nayru, Din, or Farore. Instead, the people of Termina seem to commemorate the Four Giants, presumably sent by the Goddesses to protect Termina, similar to the Great Deku Tree. There seems to be no Triforce, at least as of the present, which means there are no chosen wielders of the Triforce, making the world doomed, and unstable, even with the Four Giants help.

Each year a festival called the Carnival of Time is prepared in order to celebrate the Four Giants when the sun and moon are in alignment. During the Carnival, it is normal to wear masks that represent the Giants. In the events of the game, Link enters at the time when the Town is preparing for this celebration, which happens to be on the eve of the fourth day. However, this is also the time the impending apocalypse from the falling of the Moon is supposed to be occurring.

It was told by the Happy Mask Salesman that this ancient tribe was using hexing rituals and dark magic with the help of Majora's Mask. But to prevent further misuse, they sealed the mask away; it is this mask that the Skull Kid stole and got possessed by. When the demon Majora started possessing the Skull Kid, he started to inflict misery on the citizens and even brought down the Moon from the heavens and set it on a course to destroy Termina.

Termina, much like Hyrule, has its own mythology. In the tale told, long ago, the people of Termina were watched over by Four Giants. This was before the people moved away into the four geographical directions. But one day, they told the people that each one of them would go into the East, South, West and North and sleep. If the people needed help, they would awaken from their respective regions. But the Skull Kid got angry with this news and felt alone, so he caused mischief. The Giants reside within the four regions of Termina; Woodfall, Snowhead, Great Bay, and Ikana.

As in other Zelda games, Termina uses Rupees as its currency. Clock Town seems to be the capital and has its own Mayor, but each of the four regions of Termina have their own Leader: the Swamp has a Deku King, the Zora have Toto, Ikana has Igos du Ikana, and the Gorons have their own leader as well.

Clock Town during the First Day

Clock Town lies in the central region of Termina. It is the location of the Milk Bar, Stock Pot Inn, Mayor's Residence, etc. Clock Town is mostly home to the Hylian race or their Terminian counterparts. On the eve of the fourth day, this is where the annual Carnival of Time begins. Clock Town is the first location Link enters in the game after being transformed into a Deku Scrub. The main feature is the Clock Tower, which is situated to the middle of the Town. The Town itself is divided into five distinct sections: West, East, South, North, and the Laundry Pool.

The Swamp Volcano, location of the Woodfall Temple

Woodfall is the first region Link visits after leaving Clock Town and is home to the Deku Scrub tribe. When Link first visits the region, its waters have been poisoned due to the menacing work of the Skull Kid, thus causing many problems. The main area surrounding Woodfall is the Southern Swamp. This area contains the Swamp Tourist Center, the Magic Hags' Potion Shop, and the Woods of Mystery. After clearing the Big Octo, a new section of the Swamp will be accessible and this leads to the home of the Deku Scrubs, the Deku Palace. Further on in the Swamp lies the similarly named Woodfall, which is a giant Swamp-filled crater that houses the Woodfall Temple.

Snowhead is the second region that Link visits in the game. This region lies to the northernmost of Termina and is the home of the Gorons. Link encounters this area after he has ridden the evil at Woodfall, where he gains the Bow which is the key to accessing the Snowhead Trail. At this current time, the region of Snowhead is suspended in winter when in fact it is meant to be spring. This has caused many of the Gorons to stay inside the Goron Shrine and is the recent cause of Darmani's death. It is here where the Snowhead Temple, Goron Village, and Mountain Village are located.

Romani Ranch lies to the south of Termina and just north of the region of Woodfall. It is a large farm that is most famous for providing Milk, called the Chateau Romani, to Clock Town. The Ranch is home to Cremia who lives here with her younger sister Romani. The Ranch is also neighbors with the Gorman Brothers' Racetrack. Within the Ranch itself are the Doggy Racetrack and the Cucco Shack. Link must retrieve Epona from this area in order to access the Great Bay. However, the Road to the Ranch is blocked by a large boulder that takes three days to be removed. Alternatively, the Ranch can be accessed earlier if Link uses a Powder Keg to blow up the boulder.

Great Bay is the third region in the game that Link encounters. The Bay itself is situated to the western section of Termina and is mainly the home of the Zoras who live in the Zora Cape. This region is also the home of the Gerudo Pirates, who reside within the Pirates' Fortress. The main area in this region is the Great Bay Coast, which is experiencing a strange increase in temperatures causing the waters to be murky. This Bay can only be accessed when Link has retrieved Epona from Romani's Ranch. Link obtains the Zora Mask here, after the death of Mikau, and with this, he can navigate the waters of the bay. On the edge of the coast lies Pinnacle Rock, which leads into the Great Bay Temple.

Ikana is the final region of the game that Link visits on his quest to stop the falling of the moon. This region is situated to the east of Termina and consists of four parts: the Graveyard, the Ikana Canyon, Stone Tower, and the Ancient Castle of Ikana. The Graveyard has the great skeleton, Captain Keeta. The canyon part of Ikana is haunted by dead soldiers' spirits, and Gibdos. It is a very desolate place and is very haunting, but can be stabilized by returning the flow of water in the Spring Water Cave so that the Music Box House has the ability to play Farewell to Gibdos, driving the undead away. Further on is the trial up to the Stone Tower Temple, which can only be accessed by learning the Elegy of Emptiness. In Ikana Canyon, Sakon's Hideout is located there and is only accessible during the Kafei and Anju Side Quest.

South Termina field with the Swamp in the background

Termina Field is large circular field surrounding Clock Town. This Field connects all four geographical continents; Woodfall, Snowhead, Great Bay and Ikana with each other. Link must travel through this field in order to get to his destination. It hasn't got any cities except Clock Town, and the only other building is the Astral Observatory, which lies to the south west. The Field itself contains a few notable enemies as well as hidden holes in the ground.