From Zelda Dungeon Wiki
Jump to navigation Jump to search
Want an adless experience? Log in or Create an account.
Snowhead 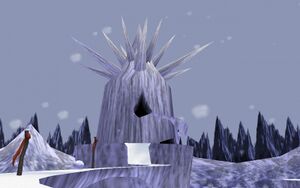 Snowhead is one of the four main regions from Majora's Mask. Snowhead is located in the north of Termina, and is a snowy mountain range just waiting for spring. The Goron race inhabits this cold and frosty area, which is unusual for them, as they usually inhabit the hot Death Mountain. The most notable Goron that can be found here is Darmani. This location houses the second dungeon of Majora's Mask, the Snowhead Temple. The time that Link enters Snowhead, he finds it to be experiencing a big shift in weather as it is meant to be spring, but the area is still caught in winter.

This is the first area that Link encounters in the region of Snowhead and it serves as the main central point leading off into the many other areas within the region. To the east is the Twin Islands which leads on to the Goron Village, to the north is a cliff ascending to the Goron Graveyard while to the west is the path leading up to Snowhead Temple. The most notable location here is the Mountain Smithy, which is located towards the center.

The Mountain Smithy is a small wooden cabin located in the Mountain Village of the Snowhead Region. It is owned by two blacksmiths, Zubora and Gabora. At first, they won't be able to be at service due to their hearth being frozen. However, Link can use either Hot Spring Water or his Fire Arrow to melt the ice. Once done, the pair are able to forge Link's Kokiri Sword into the Razor Sword, which can be further upgraded into the Gilded Sword with the help of Gold Dust.

This location mainly serves as the connecting point between the Mountain Village to the west and the Goron Village to the east. In the winter, the Goron Elder is trapped inside a snow boulder. After un-freezing him, the Elder teaches Link a section of the Goron Lullaby. When in the season of spring, Link can uncover the entrance to the Goron Racetrack by blowing up the giant boulder with a Powder Keg.

This is the prime location in which the Goron race resides. However, due to the harsh weather conditions, most of the Gorons have stayed inside the Goron Shrine. To the easternmost part of the Village lies the Lone Peak Shrine while to the north west there lies the Goron Powder Keg Shop. Link can also encounter a Business Scrub here, which leads him up to a Piece of Heart.

This location lies within the Goron Village and is the only accessible area when Link first enters the vicinity. As Link travels to the east of the Village, he encounters Kaepora Gaebora who tells the young hero to follow his path. After Link traverses the hidden platforms, he enters the Shrine, which contains a Treasure Chest. Within the chest is the Lens of Truth. This allows Link to spot hidden objects throughout the world.

This area is situated within the Mountain Village at the top of a cliff that requires a hidden path to climb up. It contains the grave of the Goron hero Darmani and since surrounded by Hot Spring Water. After Link obtains the Lens of Truth, he is able to spot the specific path and navigate up the cliff. Inside the Graveyard, Link plays the Song of Healing which lays Darmani's spirit to rest. After, Link is rewarded with the Goron Mask. This gives Link new abilities and the Goron's trust.

This is the area where the Gorons rest and take shelter from the harsh conditions that are happening in the region of Snowhead. Link is only able to enter when putting on the Goron Mask thus gaining trust to enter the Shrine. The area is home to the Goron Elder who has went missing. This causes his Son to cry uncontrollably. Once Link has learnt the Goron Lullaby, he is able to put the Elder's Son to rest, returning peace to the rest of the Gorons in the Shrine.

This is the second dungeon of the game and after playing the Goron Lullaby to the giant Goron, Link is allowed to access the inner grounds of the Temple. Link must use his Goron form in order to navigate up the many floors of the dungeon. It is here where Link obtains the Fire Arrow and encounters the Mechanical Monster Goht. After Link rids the evil within the Temple, the harsh winter lifts and the season of spring takes over.