From Zelda Dungeon Wiki
Jump to navigation Jump to search
Want an adless experience? Log in or Create an account.
Goron Shop 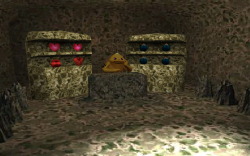 Goron Shop from Ocarina of Time

The Goron Shop is a recurring shop in The Legend of Zelda series. As its name suggests, it is a shop that is owned and operated by a Goron.

The Goron Shop in Ocarina of Time is located in Goron City and can be found in the lower section beside the Goron Vase. The entrance is blocked by a stone wall, with two Bomb Flowers growing out of the side walls next to it. Link has to break the stone wall with a Bomb, or use a Deku Stick with fire to release the Bombs attached to the wall. The Goron Tunic can be bought in the shop for 200 Rupees, but young Link isn't allowed to purchase it because it is too big for him. 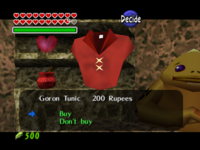 The Goron Shop in Majora's Mask is located at the lowest level of the Goron Shrine in the Goron Village. Its keeper appears similar in aesthetic and demeanor to his Ocarina of Time counterpart. During the winter, goods are priced higher. In order to reduce prices, Link must defeat Goht which ends the perpetual winter and allows for the transition to spring.

The Goron Powder Keg Shop in Goron Village, owned by Medigoron, sells only Powder Kegs. To purchase them, Goron Link must first obtain a license from Medigoron by carrying a lit Powder Keg to blow up the boulder blocking the entrance to the Goron Racetrack.

In Twilight Princess, there are three shops operated by Gorons that can be found throughout the land.

The first Goron operated shop is called the Hot Spring Shop. This shop can be found near the summit of Death Mountain, beside the Death Mountain Hot Spring. This shop's products and wares can be seen in the table below.

The second Goron operated shop is called the Kakariko Night Shop. The owner of this shop is actually a child Goron, marking the first time ever a Goron Shop has been operated by a child Goron. This shop is only open during the night. During the day, the owner of this shop can be found resting in the Kakariko Hot Spring. This shop's products and wares are shown below.

The third and final shop that is owned and operated by a Goron is called the Hot Springwater Shop. This shop can be found in the Castle Town South Road region of Castle Town. It sells one item; Hot Spring Water. The price is 20 Rupees per bottle. The owner of this shop is actually known as Gor Liggs' Son. This shop only opens after two things have been completed by Link. Firstly, he must first pay Gor Ebizo, the Goron found inside Malo Mart, 1000 Rupees, and lastly he must then travel to the West Castle Town Bridge, and dump the barrel of Hot Springwater on to the Goron found there. This barrel can be found by talking to Gor Liggs. From this point on, Link can purchase Hot Springwater from the shop.

The Goron Country Store can be found in Goron Village. It is run by Tengoron.

In Breath of the Wild there are five Goron Shops, almost all of which are found in Goron City. Their wares are targeted at tourists of other races rather than the Gorons themselves. There are also a few Goron pedlars such as Kairo and Offrak.

The Goron Gusto Shop is a General Store owned by Tanko. It is the only reliable source of Goron Spice.

Ripped and Shredded sells the Flamebreaker Set, an Armor set vital for non-Gorons who wish to traverse Death Mountain; it is especially imperative for the Abandoned North Mine and past the Bridge of Eldin. The blacksmith Rohan crafts the Armor for Rogaro to sell.

Protein Palace is an outside grill run by Aji. Aji's business was suffering before Link arrived as, as Aji admits, simply placing food on the ground of Death Mountain will cook it.

Rollin' Inn is a Goron Shop that sells services rather than goods. Tray and Volcon run it together, and offer the Goron Massage. The Gerudo Ramella sleeps here at night, as does the Sheikah Pikango before Link obtains the memory associated with the area.

Ore and More is the only Goron Shop outside of Goron City, being found in Tarrey Town after Greyson and his brother Pelison are recruited from the Southern Mine. Pelison sells the Gems that Greyson mines from the rocks of Tarrey Town.

Bulk owns Royo-Royo Depot, a Goron Shop on the edge of Death Mountain. It becomes accessible once Gotta Have a Sign is complete.

The Rock-Hard Grill is a Goron restaurant that is mentioned, but never explicitly seen. It is the focus of the eponymous quest. Unlike most Goron Shops, its wares are actually targeted at Gorons as opposed to Hylians.