From Zelda Dungeon Wiki
Jump to navigation Jump to search
Want an adless experience? Log in or Create an account.
Mountain Smithy 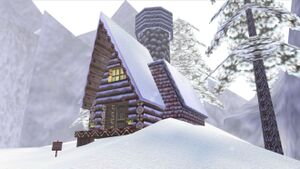 When Link first enters the Mountain Smithy, Zubora informs him that he's unable to forge his sword because of the cold snap that caused their hearth to be frozen over.[1][2] Link later encounters the spirit of Darmani, who guides the young hero to the Goron Graveyard. Link can play the Song of Healing here, which causes a small portion of the cave to be opened up with Hot Spring Water. Link can from then on bring it to the Smithy and transfer the Hot Spring Water on the frozen hearth in order to melt it.[3] In addition, Link can also use his Fire Arrow to melt the ice. This time around, the blacksmiths are able to forge once again. Link can later reforge his Kokiri Sword to the Razor Sword.[4]

Once Link has defeated Mechanical Monster: Goht within the Snowhead Temple, the winter subsides and spring returns to the entire region. This means that the annual Goron race at the Goron Racetrack can now take place. Link, however must use Powder Keg to destroy the boulder that blocks the entrance.[5] Link enters the race and finishes first, as a reward he is gifted a free Bottle containing Gold Dust from the Goron Elder's Son. If Link gives this to Zubora and Gabora, they can forge the Gilded Sword, providing Link already has the Razor Sword in his possession, this Sword, unlike the Razor Sword, is unbreakable.[6][7]