From Zelda Dungeon Wiki
Jump to navigation Jump to search
Want an adless experience? Log in or Create an account.
Goron Elder's Son 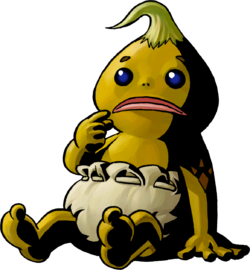 Link first encounters the Elder's Son when he gains access to the Goron Shrine after obtaining the Goron Mask. He enters to the sound of the Baby Goron's loud crying. This intense crying causes most of the Gorons within the Shrine to be very irritated and they hold there hands up to there ears in order to shield the sound.

Link must exit the village and find the Goron Elder. The Elder has been frozen in a chunk of ice that Link must melt with the help of Hot Spring Water. After doing so, the Elder teaches Link a section of the Goron Lullaby, which Link must complete. After playing the section to the Elder's Son, he remembers the song and teaches Link the remaining section. The Elder's Son now enters a deep slumber as do the rest of the Gorons within the Shrine. Link, now with the Goron Lullaby learned, can access the Snowhead Temple by playing the song in front of the giant Goron.

After Link rids the evil within Snowhead Temple by defeating Goht, peace restores to the region and winter subsides allowing the season of spring to take its place. Once Link uses a Powder Keg to blow up the giant boulder outside the Goron Racetrack, he can find the Elder's Son inside. When speaking with the young Goron, he tells Link to enter the annual race. If Link enters the race and finishes first, the Elder's Son hands Link a Bottle filled with Gold Dust as a reward from his father.