From Zelda Dungeon Wiki
Jump to navigation Jump to search
Want an adless experience? Log in or Create an account.
Woodfall 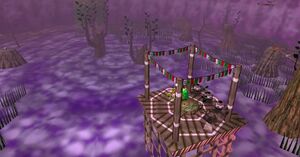 After Link learns the Sonata of Awakening from the imprisoned Monkey, he heads through the Woodfall Shortcut. When Link first enters Woodfall, he'll find what appears to be a murky purple swamp and nothing more. Link must traverse across the dangerous swamp waters to reach the Deku Altar. Ater donning the Deku Mask and playing the Sonata of Awakening on the Altar, the gargantuan Woodfall Temple emerges from the depths of the swamp.[1] Deku Link can use the Deku Flower to propel himself to the entrance of the Woodfall Temple.

After navigating the cursed dungeon and ridding the temple of the evil that lies within its depths, the swamp waters surrounding the crater return to their purified state.

When in Woodfall, if Link continues flying from platform to platform from the Owl Statue, the last one houses a Treasure Chest. Link can open the chest to receive a Piece of Heart.

If Link is able to collect all the Stray Fairies in the Woodfall Temple, he can return the fairies at the Great Fairy Fountain in Woodfall. When done so, the fairies combine to restore the Great Fairy of Power.[2]. The Great Fairy, as a thanks, grants Link with the ability to generate a more powerful version of the Spin Attack using the Magic Meter.[3] This "mastered" Spin Attack allows Link to charge up the spin further, releasing a more effective and wider range of attack.