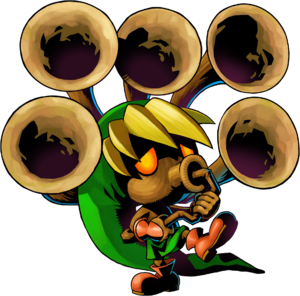 The Deku Mask is one of four of the Transformation Masks from Majora's Mask. Link becomes Deku Link in the beginning after being cursed by the Skull Kid. By reclaiming his Ocarina and talking with the Happy Mask Salesman, Link turns back into his normal form and receives the Deku Mask, which has the power to transform Link back into Deku Link. Being in his Deku form, Link has a small assortment of special abilities. By running and pressing A, Deku Link spins, which cuts grass, damages small enemies and serves the same purpose as rolling. By standing over a Deku Flower and pressing A, Deku Link can dive inside it and use it as a launching platform to fly. Deku Link can also jump on top of water, but only for a limited amount of time. By talking to the Great Fairy, he learns the ability to shoot out bubbles by pressing B, which can pop balloons. Such an ability can be used to talk to Tingle and for other purposes.

In the beginning of the game, only a few minutes after Link turns into a Deku Scrub, he encounters a Deku Scrub-looking tree. Tatl mentions that they both share the same sad look with the tree. While wearing the Deku Mask, if Link speaks to the Deku Butler who shows Link the way to the Mask of Scents, he mentions that he reminds him of his son, who disappeared a while ago. Later on in the game, when Link plays the Elegy of Emptiness, a statue of his current form appears. If Link plays it as Goron or Zora, the statues that appears is of either Darmani or Mikau. However, if Link is a Deku, a simple Deku Scrub appears instead. Finally, at the end of the end credits of the game, the Deku Butler can be seen kneeling beside the Deku Scrub-looking tree.

Although it is never actually mentioned in the game, only hinted at, one can assume the Skull Kid met the Deku Butler's Son on his way out to Termina and turned him into a tree. He then used the spirit of the Deku Scrub to turn Link into one himself. When in the Goron or Zora form, the other members of the same race recognize Link as either Darmani or Mikau. The Deku Butler on the other hand, only thinks Link reminds him of his son. This means that the little Deku Scrub statue that appears when Link plays the Elegy of Emptiness is quite possibly the Deku Butler's son.

When using the Ocarina as Deku Link, it appears as the Deku Pipes, a number of wooden trumpet horns all attached to a mouth piece. This instrument is known for its high volume, and is required to play the Sonata of Awakening with maximum effect. If that song is played with the Deku Pipes, the Woodfall Temple rises from the swamp and grants access to the intrepid musician. The Deku Princess is also capable of playing the Deku Pipes, though she had only learned recently. Link must summon the temple from the depths of the swamp using his own pipes and the song he learned from a captured monkey in order to pursue and rescue the wooden princess and free the innocent monkey.