From Zelda Dungeon Wiki
Jump to navigation Jump to search
Want an adless experience? Log in or Create an account.
Deku Butler 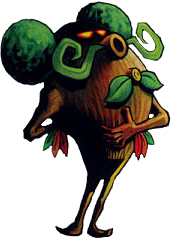 The Deku Butler is a minor character from Majora's Mask located in the Deku Shrine next to the palace.

The Deku Butler is the butler to the Royal Family of the Deku Kingdom that is found in the Southern Swamp at the foot of Woodfall. He is very proper and polite and is at one point in time called "neat and tidy" by the Happy Mask Salesman when Link shows him the mask that was previously owned by him. He is able to keep his cool a lot better than the Deku King when the Deku Princess goes missing and it is automatically assumed by the king that it was the monkey's fault. He is the only one in the Deku Palace that somewhat believes the monkey's claims of the princess being in trouble.

The Deku Butler has a Son that has been missing for some time. He misses his son and wonders where he is and wishes that his son would contact him telling him of his location. He comments on one occasion to Link that he reminds him of his son and that he used to race competitively with him. At the end of the game it appears that the butler left Deku Palace to search for him and effectively found him as the twisted tree that Tatl commented about in the beginning of the game. He is shown in the credits mourning his son's death at the foot of the tree.

After Link defeats Odolwa, rescues the princess, and successfully brings her back home, he rewards Link at the request of the King. He meets Link at the Deku Shrine found to the right of the Palace after exiting it. Inside, he leads Link to the reward by going through a maze with the hero trying to catch up to the butler before the doors close on him and effectively trap him inside the labyrinth. Once he and Link reach the end of the labyrinth, he gives Link the reward which is the Mask of Scents. After giving him the mask, he summons a portal to allow Link to return to the entrance of the Deku Shrine.