From Zelda Dungeon Wiki
Jump to navigation Jump to search
Want an adless experience? Log in or Create an account.
Epona 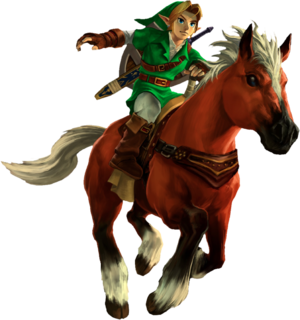 Epona is Link's horse, a mare, and his main method of transportation in The Legend of Zelda series. When riding Epona, six icons (either carrots or spurs) will appear. Pressing the A button will give Epona a burst of speed at the cost of one of these carrots or spurs. After a short period of time without sprinting, the icons will be replenished.

In Ocarina of Time, Epona can be found in Lon Lon Ranch with Malon as a child. She is a shy horse who keeps her distance from everybody other than Malon. After Link talks to Malon, she teaches him Epona's Song. During this time, Epona grows fond of Link. When Link returns as an adult, and after paying Ingo to take a ride on a horse, Epona's Song can be played to summon Epona and ride her around the enclosed area. If Link speaks to Ingo while mounted on Epona, he will challenge him to a Horse Race. Beating him twice allows Link to keep Epona, and although Ingo tries to keep him from leaving the ranch, he can simply jump a fence to get out.

Epona is a very useful companion, allowing Link to quickly and safely get from one place to another in the vast land of Hyrule. Link is completely invincible while on Epona. As an adult, using Epona is the only method of reaching the Gerudo's Fortress, before acquiring the Longshot. Epona also helps tremendously in completing the timed missions within the Trading Sequence.

When Link has returned peace to Hyrule, he returns his beloved Epona to Lon Lon Ranch and returns to a child.

In Majora's Mask, Epona appears in the opening cutscene as Link is traveling to Termina. Epona is then kidnapped by the Skull Kid and disappears for a portion of the story. Link finds Epona in Romani Ranch later in his adventure, but is unable to ride her unless he manages to get into the ranch on the First Day using a Powder Keg, and agrees to help Romani with her alien problem.

Although no longer the fastest method of transportation, (now outpaced by the Goron Mask) Epona can still be used to jump obstacles and get to otherwise inaccessible areas such as the Great Bay. Link is also invincible while on his steed in this game. Epona is required to complete the game.

In The Minish Cap, Epona is owned by Malon and used to help pull the wagon that contains Lon Lon Milk from Lon Lon Ranch. Epona is only in Hyrule Town whenever Malon is also in town, otherwise she can be found back at the ranch.

If Link tries to talk to Epona while in his normal form, Epona will just reply with horse noises.[1] However, if Link is in Minish form, he can talk to Epona, who tells him to buy some Lon Lon Milk from her so that the wagon is not as heavy on the way back to the ranch.[2] Link is able to fuse Green Kinstones with Epona.[3] As it is a Green Kinstone fusion, it is not set to a specific treasure chest, but instead, one of the many possible treasure chests. There is one random Red Kinstone within the game that opens up a location in the Hyrule Castle Garden leading to a Piece of Heart, as well as a random Blue Kinstone that opens up a tree in North Hyrule Field leading to a Fairy Fountain. Epona is one of the many characters that Link can make these Kinstone fusions with. 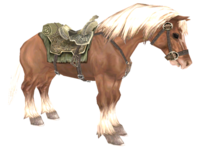 In Twilight Princess, Epona is Link's horse from the get-go, which he uses on the ranch that he works on to help him herd goats. She was to take Link to Hyrule Castle not far into the adventure, which leads to the main storyline of the game.

In Breath of the Wild, Epona can be summoned through the use of an amiibo. After making it off the Great Plateau, and preferably while Link is close to a Stable, two amiibo can be used to summon Epona:

Summoning Epona at the Great Plateau will cause her to be trapped there, as there are little to no routes for a horse to climb down, aside from the aforementioned lack of stables in the plateau.

It should be noted that this is a one-time use for both amiibo, even if the amiibo is used again or Epona dies, she can never be summoned into the game again. Subsequent uses of the amiibo will summon treasure chests and other loot instead. Therefore, it is recommended to register her immediately so that she can be kept permanently. In both amiibo, Epona will always be the first summon until she's registered at a stable; afterwards, using the amiibo will yield the other bounty.

Epona is an average horse with 4★ stats all around, Gentle in nature, and comes fully trained; this effectively makes her the most balanced and best Gentle horse in the game. Once registered, Epona will have her own bridle and saddle that cannot be changed. Like all gentle horses, Epona does not rear when her spurs are spent, also having the longest lasting gallop of any horse in the game.

Malanya's spring allows the resurrection of horses that have died, so Epona may only be revived once she's registered in a stable.

There are also horses in the game with similar coats and hair as Epona, though their colors are usually less bright.

As part of the quest Good-Sized Horse, Epona can be sold to Zyle for 300 rupees.