From Zelda Dungeon Wiki
Jump to navigation Jump to search
Want an adless experience? Log in or Create an account.
Coro 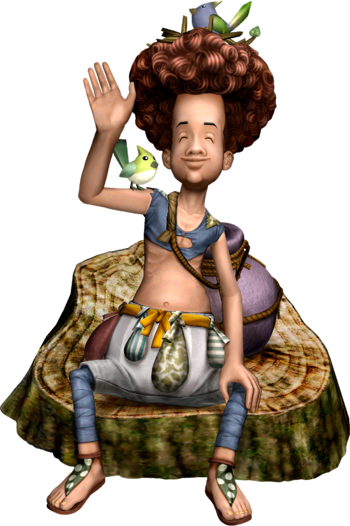 Coro is a character that appears in Twilight Princess. He has a large afro, which he lets birds nest in. He is one of many Humans that Link encounters in the game. However, it is unknown if Coro is a part of any particular village. His house is located just outside of the Ordona Province in Faron Woods, where he runs his Lantern Shop.

Coro is the first member of the family of three that Link encounters in Twilight Princess. Coro's sisters are named Iza and Hena. They both run attractions in the Lanayru Province; Iza runs the Rapid Ride and Hena operates the Fishing Hole. During a specific part of the prologue, when Link is pursuing Talo who has run off, he encounters Coro sitting just outside of his house. Coro offers Link a free Lantern, saying it's a business tactic as now Link has to buy Lantern Oil to operate the lantern.[citation needed] The Lantern allows Link to easily navigate through the dark caves and ultimately save Talo. Additionally, the Lantern continues to be an important item throughout the game. To refill the Lantern, Link can return to Coro to do so, however there are alternative sources of oil in other parts of Hyrule.

Coro also has a pet bird, Trill, who watches another shop farther into Faron Woods. This shop is called Trill's Shop, and sells Lantern Oil and Red Potion. It is located in the northern part of Faron Woods, near the entrance to the Forest Temple. If Link steals from Trill's Shop, which is exceptionally easy, Coro gets mad at Trill for allowing it.[citation needed] Coro is considered the "lazy", "worthless", and lousy fisher in his family by his sisters, and doesn't have that much respect. However, his sisters might be joking around just because he's family. Nonetheless, he is still considerably nice to Link. He is also one of the few people who aren't afraid of Link when he's a wolf, claiming that his sister is scarier than him.[citation needed]