From Zelda Dungeon Wiki
Jump to navigation Jump to search
Want an adless experience? Log in or Create an account.
Darbus 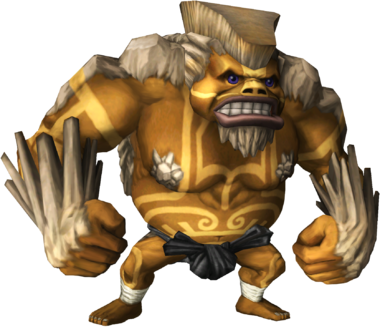 Darbus is the patriarch of the Goron tribe on Death Mountain in Twilight Princess.[1] He was consumed by the Fused Shadow and was locked away, deep in the Goron Mines.[2] There he became Fyrus. Link restored Darbus to his normal form, but Darbus was never notified of Link's feat.

Darbus is huge and very intimidating, but he is always willing to help his friends. Although he has incredible strength, he attempted to create a joint society with the humans before he was turned into a monster.[3] He broke the rocks near the Bridge of Eldin and allowed Link access to the Hidden Village warning Link of the dangers present there.[4]

After Link restored him to his normal form, he forgot his memory of his dark time and that Link helped him. The Gorons has not told him that Link was the one that saved him. The elder, Gor Coron, was the tribe's patriarch before Darbus. When Darbus was overcome by evil, Gor Coron led the Goron tribe in place of Darbus.

Darbus also aids in restoring Ilia's memory along with Gor Coron late in the game.[5]