From Zelda Dungeon Wiki
Jump to navigation Jump to search
Want an adless experience? Log in or Create an account.
Boat Rental Cabin 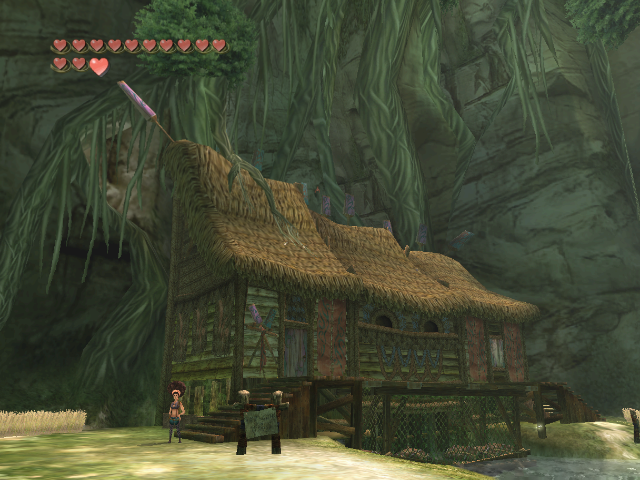 The Boat Rental Cabin is a location that appears in Twilight Princess. It is situated within the third province of the game, Lanayru, within Upper Zora's River; where it bridges over the river that runs through the region. Within the cabin is Iza, one of Coro's sisters, who runs boat tours that run through Zora's River and on to Lake Hylia.

Link first encounters this area while trying to rid the province of perpetual Twilight. Now in Wolf form, Link spots Iza just outside the cabin. Soon enough, a Shadow Insect appears and this causes Iza to rush back into her home. After Link has restored the light to Lanayru Province, he can return to this location. However, he soon encounters three Shadow Beasts. After defeating them, Iza acknowledges the young hero's strength and invites him into the cabin. Iza used to run boat tours here but is currently unable to due to a large boulder blocking the entrance. Link must equip his Bomb Arrows and destroy the boulder, thus opening up the boat tours once again. Iza then assists the young hero as he tries to shoot down the boulders within the river, which are currently blocking the flow of water into Lake Hylia.

Link can return to this cabin later on, where he can take part in a Mini-Game of sorts. Link must pay 20 Rupees to hire a boat. Here the young hero must navigate his boat down Zora's River, while shooting giant pots. There are two types of pots that Link must shoot, yellow and red. The yellow pots are larger and are worth one point while the smaller red ones are worth two points. Link must gather a total of 25 points in order to pass the Mini-Game. Once Link has done so, Iza's assistant hands him a Giant Bomb Bag, which allows the hero to hold up to 60 Bombs.