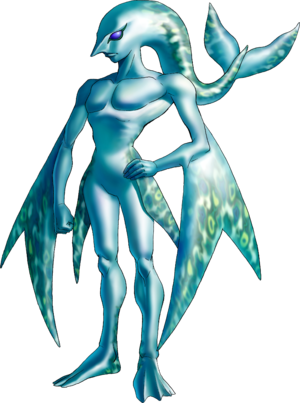 The Zora is a recurring race of aquatic folk in The Legend of Zelda series. There are two subspecies of Zora: River Zora and Sea Zora. Though named after their most frequented habitat, River Zora can be found in the sea and vice versa. Their main distinctions instead are their morphology and their temperament.

The River Zora are green with a dorsal fin running the length of their spine, and fins framing their face. They are generally hostile and can shoot fireballs, though a few are approachable and may even help Link.

The Sea Zora, on the other hand, are light blue with pectoral fins attached to the arms, and a dolphin-like peduncle and fluke jutting from the back of the head. They are generally peaceful. 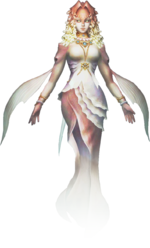 Rutela has a special look that differs from other Zoras

Zoras resemble other marine creatures. They have fins on both arms, and in Majora's Mask, Link uses them as some sort of Boomerang. Their head has a tail that stretches out on the back. Most of them are humanoid looking, but there are exceptions such as Toto, King Zora, Ralis, etc. The males and females are hard to specify, since they look very similar and if the Zora is not wearing clothes, it is almost impossible to judge. Rutela in Twilight Princess look more like a mermaid, and in that game, the Zoras have armor instead of being "naked".

As with Deku Scrubs and Gorons, the Zora usually have a larger purpose in the plot. The leaders have been shown to be a little different from the general Zora and male too, with the exception of Queen Rutela in Twilight Princess, the ghost of whom Link first encounters after saving Zora's Domain. Toto in Majora's Mask is a respected manager of The Indigo-Go's and he is very round. King Zora XVI from Ocarina of Time is also very large and in a place of leadership.

The River Zoras are more monstrous-looking and have not been shown as much. They like to fire energy bursts at Link. They have fangs and look more like monster fishes than Zoras. In A Link to the Past, the King of the Zoras is a River Zora. Many friendly River Zoras appear in A Link Between Worlds, including the Zora Queen, Queen Oren, and the Zora underlings that wear capes.

A River Zora, a monster that Link fights in some games.

Certain other features of the Zora biology are revealed when Link can inhabit the body of the Zora Mikau in Majora's Mask. When Link assumes his Zora body, he can swim with great ease and agility, using his forearm fins to perform barrel rolls or to jump out of the water. Moreover, these fins are specialized for Link's fighting needs. They can grow larger to serve as sharp-edged weapons similar to swords, and even be projected as twin boomerangs; they retract again when not in use. Link's right fin also grows to become his shield when defending.

Additionally, Zoras who possess magical power have the ability to create electric fields around their bodies as a defense mechanism when swimming, much like electric eels. This ability has only been seen and used in Majora's Mask. All Zoras are powerful swimmers ― in fact, they are powerful enough to swim up waterfalls, as seen in Twilight Princess.

It is also revealed in Majora's Mask that Zoras lay eggs to reproduce. Zora eggs need to be kept in cold, clean water in order to develop healthily, and every egg from the same clutch must be kept together in order for them to hatch. Newborn Zoras are tadpole-like with a circular body and a long, skinny tail ending in a fluke, much like a music note.

Zoras appear in most games in the series. In the first few, they are enemies, whereas in later games, they are a friendly race.

River Zoras are the only variety seen in The Legend of Zelda. They only appear on screens where there is water. They will hide under the water and occasionally pop out, shooting fireballs out towards Link. These fireballs can only be blocked with the Magical Shield. 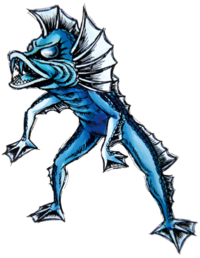 "Like Poseidon in his day, Zora ruled the waterways of Hyrule, controlling storm and calm, current and waterfall. Zora's Spawn answered only to him, and he determined who would use the Whirlpools that carried swimmers from place to place. Zora's special Flippers let swimmers tread in even the deepest waters, but they cost deeply."

Once again, River Zoras appear in A Link to the Past. They behave similarly to their counterparts in The Legend of Zelda by diving underwater and only coming up to shoot fireballs at Link. However, King Zora is not hostile. He will sell Link the Flippers.

The River Zoras appear again in Link's Awakening as enemies inhabiting the water areas such as Martha's Bay. There is only one friendly Zora in the game that can be found in Animal Village. He can only be seen with the Magnifying Lens in the house in the northeast of the village. When Link talks to him, the Photographer appears and takes a picture of the pair. 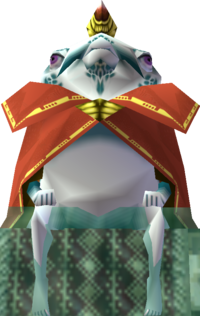 King Zora has a round and much bigger form than other Zoras.

Ocarina of Time is the first game that Sea Zoras make an appearance. Their main habitat is Zora's Domain, near Zora's River. They are ruled by King Zora XVI. When Link arrives at their domain in search of the next Spiritual Stone, the Zora's Sapphire, he finds that King Zora's daughter, Princess Ruto, has gone missing. Link finds a letter from her in a bottle that says she is inside of Lord Jabu-Jabu's belly. Link rescues her, and she gives him the Spiritual Stone as a reward.

Seven years into the future, after Link withdraws the Master Sword, he visits Zora's Domain and discovers that it is completely frozen over. After traversing the Ice Cavern, he obtains the Iron Boots and enters the Water Temple. In there, he finds Ruto, and once he defeats Morpha, she becomes the Sage of Water.

Zoras in Majora's Mask are found in the Great Bay region of Termina. There are several normal Zoras living in the area; however, there is also a popular Zora rock band called The Indigo-Go's. Like the Deku and Goron races, there is a mask allowing Link to turn into a Zora.

The Indigo-Go's are a Zora rock band exclusive to Majora's Mask. It consists of Mikau (guitar), Evan (piano), Japas (bass), Lulu (vocals), and Tijo (drums). The manager is Toto.

One of Link's four transformation masks is the Zora Mask. After playing the Song of Healing to Mikau on the shores of Great Bay, his spirit gets turned into a mask. When Link wears said mask, he turns into the Zora guitarist himself. The mask not only allows Link to become a Zora but also to have the abilities of one as well. He can swim fast in water and attacks with the fins on his arms. His musical instrument to replace the Ocarina of Time is known as the Guitar of Waves.

The Zora race inhabits the seas south of the areas known as the Fairies' Woods in the Present and the Deku Forest in the Past. They live under the water in Zora Village, appropriately within the Zora Seas. Unlike the River Zoras, who protrude from various waters and shoot fireballs at Link, the Sea Zoras are a gentle race of a more human-like appearance and intelligence.

Link ventures to Zora Village after completing the Mermaid's Cave and obtaining the Mermaid Suit, which allows him to swim and breathe underwater. Upon traveling to the past age of Zora Village, Link finds that because of the pollution that fills the seas, thanks to Veran, King Zora has become very ill. In order to save King Zora's life, Link must bring him some Potion. King Zora rewards Link by giving him the key to the Eyeglass Island Library, where Link then obtains the Fairy Powder, use it to return the Fairy Queen to her former self, and ultimately have her to cleanse the seas of all the pollution. These acts gain Link the trust of King Zora to enter their deity Lord Jabu-Jabu, which is actually the location of the seventh dungeon and Essence of Time.

Once Link obtains the seventh Essence, he is given the Zora Scale for all he has done for the Zora people. This scale allows Link to enter the Sea of Storms, located just east of Zora Village, and leads to the eighth dungeon and final Essence of Time.

Laruto, the only Zora in The Wind Waker

There is only one Zora in The Wind Waker: Laruto, the Sage of Earth. She was killed by Ganondorf to prevent her from praying to keep the power to repel evil in the Master Sword. Her spirit remains in the Earth Temple until Link plays the Earth God's Lyric. She tells him to go and find her descendant, a Rito girl named Medli.

Eiji Aonuma has said that the Rito are the evolved form of the Zora. The Rito make many references to the Zora, such as the symbol of the Zora's Sapphire appearing on clothing, but the most convincing fact is that Medli shares a bloodline with a Zora, Laruto.

In Twilight Princess, the Zoras once more are a peaceful race residing in Zora's Domain, near Lake Hylia. When Link first arrives, their home is covered in ice, but he can easily unfreeze it with a large volcanic rock from Death Mountain. The Zoras were ruled by Queen Rutela until her death, when her son, Prince Ralis, was supposed to take over. Link finds Prince Ralis in Castle Town, where Ilia is trying to save him from sickness. Queen Rutela asks Link to save her son, so he guides Ralis, Telma, and Ilia across Hyrule Field to Kakariko Village. Once Ralis is safe, Rutela gives Link the Zora Armor in the Graveyard.

Only River Zoras appear in A Link Between Worlds. Some are hostile and some are not. The non-hostile Zoras wear capes. The Zora Queen, Queen Oren, is a sage. Also, a Shady Guy steals the Smooth Gem from her pool, causing her to swell. Link needs to purchase the Smooth Gem for 200 Rupees at Kakariko Village and return it to the pool. Queen Oren will then give Link the Zora's Flippers.

"The Zora are an aquatic race who live in the pure, bountiful waters of Lanayru. They have fish-like fins and uniquely colored scales. They excel at swimming and water-based activities, but that also makes them vulnerable to electricity. They have their own royal family that goes back countless generations and unifies the people. Compared to other Hyrulean races, the Zora age slowly and are extremely long lived. That is why there are so many Zora still alive who experienced the Great Calamity firsthand."

In Breath of the Wild, the Zora are first encountered as searching for a Hylian due to Divine Beast Vah Ruta causing heavy rainfall around Zora's Domain. Link meets Prince Sidon who asks him to come to Zora's Domain. There, Link is told of his past with Zora Champion Mipha the Zora Champion, before he goes to free Vah Ruta. He is given the Zora Armor by King Dorephan before going to the East Reservoir Lake to the Divine Beast. After freeing the Divine Beast, Dorephan and Muzu give Link a Chest containing the Lightscale Trident, which once belonged to Mipha.

The Zora do not have much more of a part to play in the game, but there are several side quests that can be completed at Zora's Domain.