From Zelda Dungeon Wiki
Jump to navigation Jump to search
Want an adless experience? Log in or Create an account.
Sea of Storms 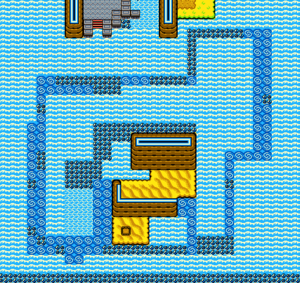 Sea of Storms in the Present

The Sea of Storms is a location found within the Past and Present of Oracle of Ages.

The source of the water has also evolved over time. In the Past, the water comes from Rolling Ridge, passing through the Coast of No Return, the Sea of No Return, and then flowing into the Crescent Strait and Sea of Storms. However, in the Present, this water pathway has been drained by the expansion of land that makes up the Forest of Time and Yoll Graveyard. The water flow now originates up north at the Nuun Highlands. It flows through Lynna City, South Lynna, South Shore and into the Sea of Storms.

After Link completes the seventh dungeon, Jabu-Jabu's Belly, Link is given the Zora Scale. Using this scale, Link can speak to the Zora underneath the water and he'll let Link pass. Link can then freely travel to the Sea of Storms where he will find the Pirate Ship.

Once Link boards the Pirate Ship he will encounter the Piratians and their Captain. The Piratians have been stranded within the Sea of Storms and cannot get out. After finding out that Link has the Zora Scale the Captain will ask him for it, thinking that it will calm the seas. After getting the Zora Scale, the Piratians will set sail for the land of Holodrum, the Overworld found within Oracle of Seasons.

In exchange for the Zora Scale the Captain will give Link the Tokay Eyeball. This Eyeball is used over at Crescent Island to find a secret underground cave that leads to the Sea of No Return.

At the bottom of the sea within the Sea of Storms there is an underground cave with a Treasure Chest inside. When opened, Link will discover a Seed Ring. When Link gets this ring appraised it will become the Pegasus Ring.

A similar underwater cave can be found in the Present of the Sea of Storms. Despite the fact that the underwater cave is in a different location, the interior is identical. The Treasure Chest inside still contains a Seed Ring that will become the Pegasus Ring when appraised.