From Zelda Dungeon Wiki
Jump to navigation Jump to search
Want an adless experience? Log in or Create an account.
Dimitri 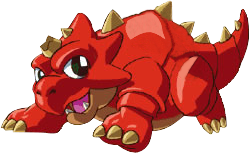 Dimitri is a character that appears in Oracle of Seasons and Oracle of Ages. He has the ability to swim, climb waterfalls, and eat almost any enemy. Link can also pick Dimitri up by using the Power Bracelet. Dimitri is the only known friendly Dodongo in the entire series.

Dimitri is encountered when Link is searching for the Zora's Flippers in Sunken City. He is being pestered by the Safety Patrol, a group of three children, but they go away if Link gives them some bombs.

If Link wins the Strange Flute from the Subrosian Dance Hall before entering Natzu, he is able to find Dimitri being pestered by some Moblins in Spool Swamp. After Link gives them 80 Rupees, they go away and Dimitri joins Link and the Strange Flute becomes Dimitri's Flute.

After completing the Moonlit Grotto on Crescent Island, Link encounters the third and final Animal Companion, Dimitri, the red Dodongo. Dimitri is discovered washed up on the shores of Crescent Island and about to be eaten by two Tokay. Link chooses to trade some Ember Seeds to the Tokay in exchange for Dimitri, who thanks Link by assisting him in crossing the sea back to the shores of Lynna City.

Dimitri is a fast swimmer who can also scale waterfalls with ease, as well as cross currents without having his direction altered. As an attack, Dimitri can bite and eat enemies. He can also be picked up and thrown at enemies if Link uses the Power Bracelet.

Like Ricky, Dimitri's Flute must be obtained after completing the Moonlit Grotto, but before going to the Nuun Highlands to search for the Carpenters. During this time, a Strange Flute can be purchased from the shop in Lynna City. If purchased, Link encounters Dimitri for a second time in the Fairies' Woods, just like the other two Animal Companions. After Link rescues him from the woods, Dimitri teaches him a song to play on his Strange Flute, changing it into Dimitri's Flute, and allowing Link to access Dimitri when needed in the overworld.