Sea of No Return

From Zelda Dungeon Wiki
Jump to navigation Jump to search
Want an adless experience? Log in or Create an account.
Sea of No Return 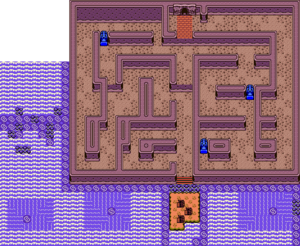 The Sea of No Return is a location found within the Past of Oracle of Ages.

The Sea of No Return is located at the east portion of Labrynna while in the Past. The Sea can only be reached after Link has completed Jabu-Jabu's Belly and then completed a series of obstacles. Link will need to enter the Sea of Storms where he will find the stranded Piratians and meet their Captain. After giving him the Zora Scale, Link acquires the Tokay Eyeball. Link can then use this Eyeball on the Tokay Statue found on Crescent Island, which opens up a passage to an underground cavern in the same location where the Moonlit Grotto is located in the Present.

The underground passageway leading to the Sea of No Return consists of a three rooms, each one representing one of the virtues of the Triforce. The first room exemplifies Power as Link will need to battle within a room filled with Gibdos. The second room exemplifies Wisdom, as Link will fight a series of undefeatable enemies including Blade Traps and Hardhat Beetles. The final room exemplifies Courage as it contains a number of invisible platforms that Link will need to navigate. After emerging from the cavern, Link can walk up one screen and move an Armos statue to find himself at the Sea of No Return.

The Sea of No Return is surrounded by a series of Whirlpools, making it impossible to enter by normal means, whether above or below ground. Only through a secret underground cavern can Link enter the interior of the Sea of No Return. Here is where Link will encounter a series of Darknuts and Lynels, as he journeys through a maze to reach the Ancient Tomb.

Within the Maze portion of the Sea of No Return, Link will find three blue Sarcophagus Statues. These massive objects are too heavy for Link to lift with his Power Bracelet. However, once Link acquires the Power Glove from within the Ancient Tomb, he will be able to lift these statues. Underneath one of the statues found at the east end of the Sea of No Return is a Treasure Chest that contains a Seed Ring. When appraised this ring becomes the Blue Ring.

In the Present, the water area surrounding the Sea of No Return has receded, making this portion of the Overworld no longer an isolated island. Instead, it is now accessible via the Forest of Time where Link can burn a bush to enter the Yoll Graveyard. The Yoll Graveyard is one of the only areas in the entire game where Link is unable to successfully play the Tune of Ages. If Links attempts to play the Tune, he will start to transition to the Past, but will be brought back by a Mysterious force, preventing him from entering the Sea of No Return in this fashion.

The area is filled with Blue Darknuts, as well as the only location in the entire game where Blue and Red Lynels can be found. These enemies, along with the narrow corridors of the landscape make it one of the most difficult areas to navigate in the game.