From Zelda Dungeon Wiki
Jump to navigation Jump to search
Want an adless experience? Log in or Create an account.
Treasure Chest 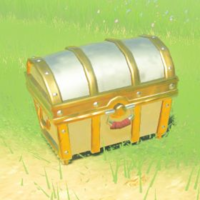 Metallic Treasure Chest from Breath of the Wild

"Treasure Chests Found
Many Hyrulian people saved family heirlooms and other treasures in chests handcrafted by skilled artisans. Historians found them in Hyrulian homes and mountain caves. Inside they discovered jewels, armor and arrows."

Treasure Chests appear often in the The Legend of Zelda series. They can contain items ranging from equipment to Rupees to enemies or keys. It is a well known fact that when Link opens said chest, exciting music sounds.

There are many types of chests in Breath of the Wild, all which have different properties:

Most chests, save from the wooden ones, are near-indestructible. The metallic chests can be destroyed under special circumstances at the Eldin province's Abandoned North Mine or at Death Mountain by them with cannon fire from the Gorons' ground cannons. Destroying them shows that the chests have actual physical item assets inside.