"Cannons were once used in this mine to excavate ore via blasting. Presently, Vah Rudania's rampaging, the increased flow of lava, and an influx of monsters have made it impossible to enter. It is the location of the boss's favorite cannon, which can be used to fire bombs." 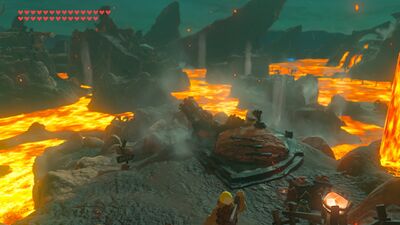 The Abandoned North Mine is a location found in Breath of the Wild. It is located north of Goron City, along the path up Death Mountain, between Darunia Lake and Lake Darman.

Composed of a small archipelago, the rock islets are mostly occupied by Fire-Breath Lizalfos archers that shoot Fire Arrows. They can be killed either by blasting their fortifications with the cannons, or by shooting them with Ice Arrows. If the intention of going to the mine is to collect Red Lizalfos Tails, it's better not to use the cannon option, as this will obliterate the Lizalfos.

Blasting some of the breakable red rock formations will yield updraft vents to paraglide between the islets, or Ore Deposits.

Yunobo can be found on the tallest, northernmost rock here after talking to Bludo for the first time during the Divine Beast Vah Rudania main quest.

The islet with the metal fortification will have a chest containing a Knight's Bow, though this may change to a Royal Bow depending on the game's progression. The skull encampment will have a chest of Ice Arrows x10, while the rock containing Yunobo will have another set of ice arrows and a Silver Rupee.

From the top of the northernmost rock, the Isle of Rabac containing Shora Hah Shrine can be reached by paragliding. 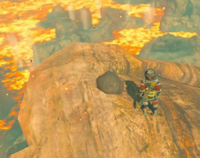 Lift the rock on top of the rock formation.

Lift the rock atop the rock formation.