From Zelda Dungeon Wiki
Jump to navigation Jump to search
Want an adless experience? Log in or Create an account.
Vah Rudania 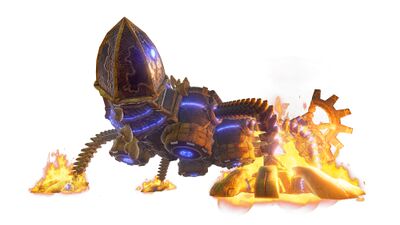 Vah Rudania is one of the Divine Beasts from Breath of the Wild and Hyrule Warriors: Age of Calamity. A Sheikah creation for use against Ganon, it was buried when technology was banned, and excavated 10000 years later in the reign of King Rhoam Bosphoramus Hyrule.

Princess Zelda offered the role of Goron Champion and pilot of Vah Rudania to Daruk. He accepted  Champion Daruk's Song , although he initially had difficulty piloting it, requiring adjustments  Resolve and Grief . Later, he demonstrated to Link that he was getting better at it  Daruk's Mettle , but had to intervene to protect Link from a falling boulder in the process.

When Calamity Ganon emerged, Daruk rallied the Champions to go to their Divine Beasts  Return of Calamity Ganon , but Fireblight Ganon infected Rudania with Malice and killed Daruk, trapping his spirit there for one hundred years.

In that time, the Beast caused increasing levels of eruptions from Death Mountain. dropping Magma Bombs on the path to Goron City, increasing the temperature to the point of making Eldin inhospitable to non-Gorons, and forcing the abandonment of the Gorons' northern mine & sites on Death Mountain.

Ultimately, the Goron boss Bludo was left to drive Vah Rudania back daily to the Death Mountain Crater with the aid of Yunobo, a descendent of Daruk who inherited Daruk's Protection and could be used as a cannonball for the purposes. When Link was revived, he found that Bludo was having issues with his back and sent Yunobo out to get medicine, and he hadn't returned. Link saved Yunobo after he'd been trapped behind fallen boulders, and the two managed to force the beast back into the crater by firing Yunobo, allowing Link to board Rudania and destroy Fireblight Ganon, freeing Daruk's spirit.  Divine Beast Vah Rudania .

Daruk then took Vah Rudania to the top of Death Mountain and locked onto Hyrule Castle. When Link confronted Calamity Ganon there, he fired, costing the Calamity one-eighth of its maximum health.

In the Daruk, the Goron Hero Scenario, as the monsters invaded the Goron Mines and preventing work from being done, Daruk and his comrades climb their way to the summit where Divine Beast Vah Rudania is located, which is inside the crator. As more monsters appear, Daruk takes control of Vah Rudania and uses it to flush out the monsters from the area after some struggling in the beginning and makes use of its enormous size to stomp on foes or send them flying, shoot lasers, and summon volcanic rocks on anyone in its path. After he succeeds, Daruk happily accepts his call to become its pilot before sharing a Prime Rock Roast with Link.

In the Water and Fire Scenario, Daruk finds that Calamity Ganon has risen from under Hyrule Castle and makes his way to Vah Rudania to launch the counterattack, but he finds Fireblight Ganon there and is stuck inside the Divine Beast. Daruk fought as hard as he could and often projected Daruk's Protection to block its attacks and it wasn't until Fireblight Ganon managed to shatter the barrier to render Daruk helpless and takes the opportunity to toss a large fiery rock at him. Before Daruk could be killed, Terrako's Gate of Time appears, letting Yunobo to come through and use Daruk's Protection to block the fatal blow, much to Daruk's shock. Yunobo's support to Daruk proved to be beneficial to the Gorons and Rudania as Link and the rescue party arrive and they have managed to destroy Fireblight Ganon. After that, Daruk and Yunobo work together on Vah Rudania to help protect Eastern Hyrule and the stronghold belonging to their allies as they destroy the bridges to prevent the Guardians from getting across.

In the EX Battle for Kakariko Village Guardian of Remembrance DLC Scenario, Daruk always stays on Vah Rudania as he assists with taking out the worst of the enemies as Yunobo and other allies handle the foes on the ground while keeping the Yiga Clan and other monsters away from himself and the Divine Beast.

In the Each Step Like Thunder Scenario, Daruk uses Vah Rudania to help assist Urbosa by using its fiery boulders to crush the forces and further helped by Vah RUta and Vah Medoh.

In the All Hyrule, United Scenario, Vah Rudania and the other Divine Beasts are summoned to Hyrule Field by Purah's supercharging of the Sheikah Towers to bring the armies together. Once the monsters that hold up the barrier are down along with being further weakened by Princess Zelda's newfound power, Daruk opens fire with the rest of the Champions to weaken Ganon.

Breath of the Wild Key Locations[edit][hide][show]
Retrieved from "https://www.zeldadungeon.net/wiki/index.php?title=Vah_Rudania&oldid=441803"
Categories: