From Zelda Dungeon Wiki
Jump to navigation Jump to search
Want an adless experience? Log in or Create an account.
Resolve and Grief 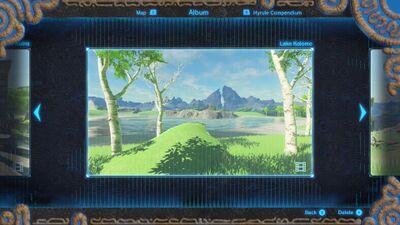 Resolve and Grief is one of the Recovered Memories found in Breath of the Wild.

After Link has completed the Locked Mementos by talking to Impa, this will begin the Captured Memories main quest. Resolve and Grief is one of the twelve pictures that are loaded in the Sheikah Slate.

Pikango at the Riverside Stable will recognize the location that is shown in the picture as Lake Kolomo. He describes it as an oddly shaped lake, just west of the stable that has a forest on the west side.[1] The location of the memory is immediately west of the lake, looking towards the lake with the Dueling Peaks off in the background.

"Zelda and Link head to Goron City to make adjustments to the Divine Beast there. Zelda expresses her commitment to researching the ancient technology and still struggles with her own quiet anguish."

The memory starts with Zelda and Link walking through the trees on the edge of Lake Kolomo. Zelda tells Link that they are on their way to Goron City, with the intent of making adjustments to Divine Beast Vah Rudania to make it easier for Daruk to pilot. The Goron Champion has apparently managed to get the Beast to move, but there is still much progress to be made. Zelda remarks that it's incredible that the Divine Beasts were made by people, but also that it means they should be able to figure out how they work, and how to use them against Ganon. She slows and falters however, realizing that this ancient technology they don't understand is their best hope against Calamity Ganon and turns to ask Link how he is progressing with the Master Sword. The memory ends with her asking Link if he has gotten to the point that he can hear the fabled voice of the sword.

Breath of the Wild Recovered Memories[edit][hide][show]
Retrieved from "https://www.zeldadungeon.net/wiki/index.php?title=Resolve_and_Grief&oldid=377806"
Category: