From Zelda Dungeon Wiki
Jump to navigation Jump to search
Want an adless experience? Log in or Create an account.
Champion Mipha's Song 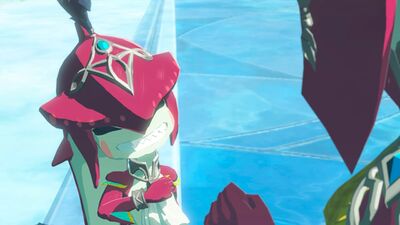 "Zelda visits the Zora princess, Mipha, and enlists her to pilot the Divine Beast Vah Ruta. While teaching her brother Sidon to swim up waterfalls, Mipha entrusts him with the duty of the Zora royal family, displaying her dedication as both princess and sister."

The memory begins with Zelda and Mipha, standing side by side at the top of one of the waterfalls near Zora's Domain, with Mipha holding the Lightscale Trident. Having presumably accepted Zelda's request that she join the ranks of the Champions, Mipha asks who the Champions are. Zelda tells her, ending the list quickly when she gets to Link. At the mention of Link's name, Mipha seems a bit put off, looking to the side pensively. She pads to the edge of the falls, looking down to where a toddler Prince Sidon is visible, treading water in the pool below. She calls down to him, telling him to hurry and swim up the falls to meet them. When Zelda suggests that perhaps Sidon is still too young to swim up the waterfall on his own, Mipha reminds the Hylian princess that one day she will have to leave her little brother "to face [her] fate with Ruta". She then jumps, surfing down the waterfall and diving into the pool where little Sidon waits, and offers to go up the falls with him this time so he can get the feeling of it. He makes a baby noise of affirmation, and they swim up the waterfall together, an amazed baby Sidon clinging to Mipha's back. At the top of the falls, their momentum carries them into the air, and Mipha spins them around and gracefully lands them on the stone platform.

Turning, Mipha kneels in front of her baby brother to be closer to eye level to him, and tells him that should anything ever happen to her, she is entrusting the safety of Zora's Domain to him. She speaks with a solemnity that suggests that she may have some idea of what will happen to the Divine Beasts, though it may also just be her awareness that her duties as Champion will be dangerous regardless. Sidon nods as though he understands, as toddlers are prone to doing. Mipha tells him she believes in him, and asks if he wants to try climbing the waterfall one more time, to which Sidon replies with a baby form of his signature winning smile. The memory ends with the Zora royal siblings laughing together as Zelda looks on.

Breath of the Wild Recovered Memories[edit][hide][show]
Retrieved from "https://www.zeldadungeon.net/wiki/index.php?title=Champion_Mipha%27s_Song&oldid=379032"
Category: