From Zelda Dungeon Wiki
Jump to navigation Jump to search
Want an adless experience? Log in or Create an account.
Father and Daughter 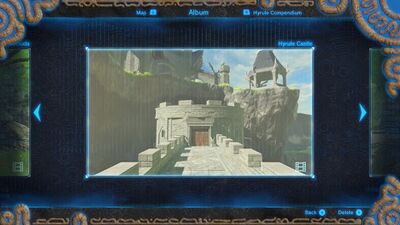 Picture in the Sheikah Slate album

Father and Daughter is one of the Recovered Memories found in Breath of the Wild.

After Link has completed Locked Mementos by talking to Impa, this will begin the Captured Memories main quest. Father and Daughter is triggered by one of the twelve pictures pre-loaded in the Sheikah Slate.

"Zelda gleefully watches the experiments with the Guardians at Hyrule Castle, but her demeanor changes quickly with the entrance of her father, King Rhoam."

The memory begins with Zelda and Link walking out onto the bridge where the memory is, to watch the Guardian experiments in the courtyard below. A Sheikah man walks around a Guardian Stalker, though the Guardian is subdued and seems to follow the man's directions, being as yet uncorrupted by Calamity Ganon. Zelda is quietly excited, telling Link about how they can actually control the Guardians now, and will soon know everything they need to about the Guardians and the Divine Beasts, and will be in a good position should Calamity Ganon ever return.

Zelda's father, King Rhoam, comes out onto the bridge with his guards and some fanfare, and asks Zelda what she is doing out here. Link kneels to the king as Zelda explains that she is assessing the progress being made with the Guardians as they will be essential in fighting Ganon. Rhoam cuts her off, telling her he knows that and sternly reminding her of her responsibilities. He asks Zelda when she will stop treating this as a "childish game". Zelda defends herself, saying she's doing everything she can and recently returned from praying at the Spring of Courage. Rhoam cuts her off again, berating her for wasting her time and telling her she needs to spend all of her spare time training to unlock and use the power that will seal Calamity Ganon away. Zelda tells him she's doing everything she can, and that she hopes her father will allow her to contribute however she can. He cuts her off a third time, telling her to stop making excuses for herself. King Rhoam then forbids her from working with the Guardians, and commands her to spend all her time training. As the Guardian experiments continue in the courtyard below, he tells her that the gossipers of the kingdom refer to her as "the heir to a throne of nothing [...] but failure" and that it is part of her destiny to prove them wrong. When he asks if she understands, Zelda looks down and quietly tells him yes, she does. King Rhoam walks away, and the memory ends.

Breath of the Wild Recovered Memories[edit][hide][show]
Retrieved from "https://www.zeldadungeon.net/wiki/index.php?title=Father_and_Daughter&oldid=449866"
Category: