From Zelda Dungeon Wiki
Jump to navigation Jump to search
Want an adless experience? Log in or Create an account.
Subdued Ceremony 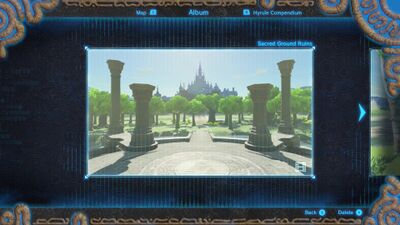 Subdued Ceremony is one of the Recovered Memories found in Breath of the Wild.

After Link has completed the Locked Mementos by talking to Impa, this will begin the Captured Memories main quest. Subdued Ceremony is one of the twelve pictures that are loaded in the Sheikah Slate.

Pikango at the Woodland Stable will recognize the location that is shown in the picture due to Hyrule Castle prominently being shown in the background. He recalls the stage here is where knighting ceremonies were once performed, but that the area is now in ruins.[1] He tells Link to be careful as it is extremely dangerous to approach these ruins now, due to the Guardian Stalkers that surround the area.[2]

The actual ruins are found at the north end of Hyrule Field, directly south of Hyrule Castle and the Hyrule Castle Town Ruins. The shining light can be found right in the center of the platform, which bears the symbol of the Triforce.

"Link is chosen to be the appointed knight to Zelda, princess of the royal family of Hyrule. Zelda does her best to facilitate the fabled "ceremony of legend," as suggested by Daruk, but her own insecurities are laid bare..."

The memory begins with Link kneeling before Zelda in the center of the Sacred Grounds, as Zelda recites a ceremonial statement of ascendance and blessing over Link. (This statement also makes some subtle references to other games in the franchise.) The four Champions stand around them, watching on somberly. Zelda falters slightly in her recital, but takes a breath and continues on as the memory refocuses on the Champions.

Daruk laments that this ceremony is rather depressing, and that Zelda is making it sound like they've already lost the fight against Ganon. Revali snaps back that the ceremony was Daruk's idea to begin with, and is overkill besides, and remarks that he is "on the same page" as Zelda in doubting Link's ability. Urbosa tells Revali to stop, and says that the princess sees Link as a living reminder of her own failures.

The memory focuses back on Zelda, who stops speaking. Link continues to kneel with his eyes closed, making no indication that he notices the Champions' commentary. The memory ends with Zelda looking down at Link with an expression of sadness and doubt.

Breath of the Wild Recovered Memories[edit][hide][show]
Retrieved from "https://www.zeldadungeon.net/wiki/index.php?title=Subdued_Ceremony&oldid=377804"
Category: