From Zelda Dungeon Wiki
Jump to navigation Jump to search
Want an adless experience? Log in or Create an account.
Champion Daruk's Song 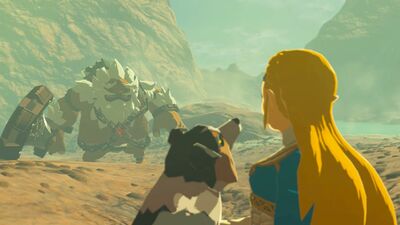 "Zelda enlists Daruk, the mightiest Goron, to pilot the Divine Beast Vah Rudania. Although he fearlessly fights off hordes of monsters with great courage, he has an unexpected weakness."

The memory begins with Daruk and Zelda walking side by side through the rocky landscape surrounding Death Mountain, trailed after by a pair of Hylian guards. Daruk jovially tells Zelda that she can count on him, and that if he must he will lay down his very life to protect Hyrule, presumably in response to her request for him to become the Goron Champion, which is not specifically in the memory. She thanks him, and he grins at her, commenting on the recent upsurge of monster activity and wondering if it might be the fault of Calamity Ganon. He turns to Zelda, cautioning her against leaving home without a strong Goron guard. She tells him he sounds like her father, and that the king is actually assigning a knight as her protector, proclaimed to be the most accomplished swordsman in Hyrule. Daruk's eyes widen in recognition, and he is about to say the name of whoever he thinks she is talking about, when he is interrupted by a troupe of blue and red Bokoblins crossing the pathway in front of them, doubtless off to cause trouble. He grumbles that the small monsters are basically everywhere now. As they start to clamber up a nearby rock, jumping around and harassing whatever is on the other side, Daruk tells Zelda to stay back as her guards jump in front of her and draw their weapons. Daruk charges forward, pulling the Boulder Breaker from his back and swinging it one-handed around into the swarm of Bokoblins. Sufficiently bruised, the Bokoblins go running off down the path and Daruk shouts after them, calling them cowards and proclaiming that no monster could possibly stand up to him, laughing in triumph.

Zelda and the guards catch up to Daruk, and Zelda looks over to discover the Bokoblin's victim: a black and white Hylian Retriever, cowering in the settling dust of Daruk's attack. She tells the dog it's safe now, and it gets up, wagging its tail and eagerly running over to Zelda to receive pets. It licks her face and she laughs, telling Daruk that apparently this dog was the one he saved. However, when she looks over to commend him, she sees Daruk cowering, shuddering with Boulder Breaker in hand and a distressed expression on his face. Zelda stares at him for a moment, confused. The dog barks, and Daruk tosses his weapon aside and turns away, curling into a ball and engaging Daruk's Protection, all while Zelda looks on, befuddled.

The memory cuts to the dog running off, with Daruk, standing again, telling it "good riddance... and stay safe." He apologizes that Zelda had to see that, and admits that he used to get chased by dogs as a child and so still panics at the sight of them. Zelda seems more amused than anything, expressing surprise that the mighty Daruk could have a weakness. Daruk sheepishly asks Zelda if she knows that Calamity Ganon isn't, perhaps, some sort of dog monster, and she starts giggling. The memory ends with Zelda and Daruk laughing together about it.

Breath of the Wild Recovered Memories[edit][hide][show]
Retrieved from "https://www.zeldadungeon.net/wiki/index.php?title=Champion_Daruk%27s_Song&oldid=438240"
Category: