From Zelda Dungeon Wiki
Jump to navigation Jump to search
Want an adless experience? Log in or Create an account.
Pikango 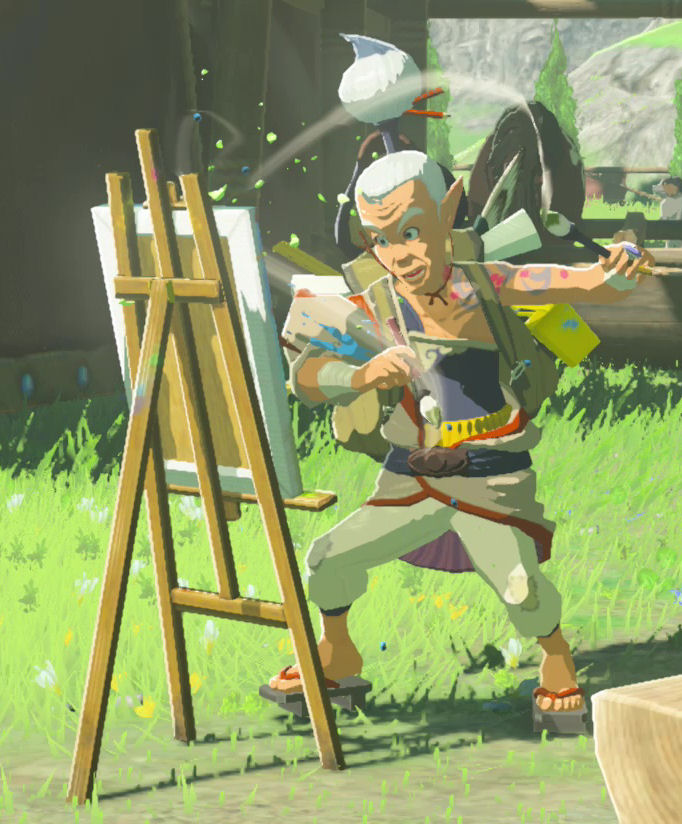 Pikango is a character found in Breath of the Wild.

Pikango is a traveling painter and appears at Kakariko Village. He is originally from the village, but left many years ago in search of beautiful landscapes to paint, subsequently meaning he is not recognised by most of the Kakariko folk. He regularly forgets who is who within the village as they all wear the same clothes.[1] Pikango is a traveler and will appear throughout Hyrule, where he is present at almost all of the various Stables.

At Kakariko Village Pikango wakes up each morning at 5am and makes his way over to just outside Impa's house. Here he has his paint setup where he is painting a picture of Impa's House. He remains here for the duration of the day, and at 10pm he will head over to the Shuteye Inn where he sleeps on the floor.

Pikango will ask Link if he's a fellow traveler and talks about how he enjoys traveling the world, searching for beautiful landscapes.[2]

Pikango has heard stories of a Great Fairy Fountain somewhere near the village. The place has a mysterious power and is breathtakingly beautiful. He wants to know more about it, but comments that none of the villagers he speaks to want to tell him anything as he's considered an outsider, as he hasn't lived in the village for multiple decades, and consequently isn't familiar with many of the younger, current inhabitants.[3][4][5][6]

Pikango is shown to be kind to those he meets, as when he leaves the Tabantha Bridge Stable, Sho mentions how he painted a picture of a beetle for them, due to Sho having a fascination with beetles, like Beedle.

After acquiring the Camera Rune, Link can return to Pikango and chat with him as he has a lead on where to find the Great Fairy Fountain. While he know's the location, he thinks it's too hard to get there.[7]

If Link offers to help out Pikango, this will begin the Find the Fairy Fountain quest. Pikango has a good idea of where the fountain is and asks Link to come along.[8] Pikango is thankful and begins to run towards the Ta'loh Naeg Shrine, located right near Kakariko Village.[9]

After passing the Shrine, Pikango will get tired and will need to sit down. However, he believes the Great Fairy Fountain to be just beyond along the path. He asks that if Link finds the fairy fountain, he take a picture of it.[10][11]

After finding the fairy fountain and meeting the Great Fairy, Cotera, Link will need to use the Camera to take a picture of the opened Fairy Fountain.[12] Return to speak with Pikango and show him the picture that was found.[13] He's a bit disappointed as he felt the fountain would be a bit more sacred and elegant looking. As a reward for helping him find the quest, he will help Link with the Captured Memories quest.[14]

This will complete the Finding the Fairy Fountain quest. Now when Link finds Pikango at the various stables in Hyrule, Pikango will help Link with other pictures as part of the Captured Memories quest.

As part of the Captured Memories quest, Link will show Pikango a variety of pictures and he will point Link in the direction as to where he can find the locations. Usually the picture that Link shows Pikango is dependent on the location, usually it being one of the closer locations.

Breath of the Wild Key Characters[edit][hide][show]
Retrieved from "https://www.zeldadungeon.net/wiki/index.php?title=Pikango&oldid=279747"
Categories: