From Zelda Dungeon Wiki
Jump to navigation Jump to search
Want an adless experience? Log in or Create an account.
Riju 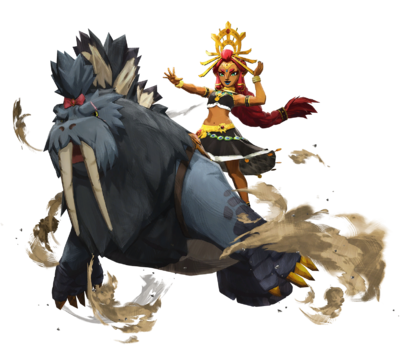 Riju, also known by her full name of Makeela Riju, is a key character in Breath of the Wild and Age of Calamity.

Riju is the Chieftainess of the Gerudo, having inherited the position after her mother passed away. Though she is considerably young for a chief, she is respected by her people. Following the line of succession, she is a direct descendant of Urbosa. She helps Link defeat the Divine Beast Vah Naboris after he retrieves the Thunder Helm from the Yiga Clan Hideout. She is very fond of Sand Seals, and has her own named Patricia. Her bedroom also contains three Sand Seal plush dolls. Buliara is her personal body guard and is extremely protective of her.[1]

When Link first arrives at Gerudo Town to speak with Riju, she allows him to approach, wondering how he got there.[2] Buliara will yell at Link, telling him to speak his business without coming any closer.[3] Riju however thinks there is something special about this particular traveler, asking what his name is.[4][5] After finding out his name is Link, she remembers the legend that happened during the Calamity. Princess Zelda had placed a fallen swordsman into a deep sleep, and that swordsman was named Link.[6] Buliara will jump in saying that particular story involved a hero that carried the legendary Master Sword, at which point Riju will explain that it is hidden away in a forest somewhere.[7][8] Riju will ask Link about the Sheikah Slate, thinking that it wouldn't be given to any normal person. Buliara also jumps in, saying that she doesn't remember any of the Champions being a Hylian vai, although she then realizes that Link is actually a man.[9][10]

Riju will talk to Link about the Divine Beast Vah Naboris, who has been causing havoc to Gerudo Town with its massive sandstorm and lightning attacks. She thinks that if Link is truly a champion, perhaps he'd be able to calm Naboris down.[11] Buliara will suggest that perhaps Link should be tasked in retrieving the Thunder Helm, which was stolen by the Yiga Clan.[12][13] Riju mentions that the Thunder Helm is capable of withstanding the lightning attacks from Naboris, and without it, there is no way to approach Naboris.[14][15] Buliara will encourage Link to speak with Captain Teake within the Barracks, to find out more about the thieves that stolen the Thunder Helm.[16]

After Link managed to take back the Thunder Helm from the Yiga Clan and Master Kohga, who falls to his doom upon defeat, Riju will be grateful for his help and she tries on the helm, asking how she looks. This triggers Link's memory of his interaction with Urbosa, which Riju is confused about his staring at him and later admits that the Helm is a bit too big for her and asks him to meet at the Lookout Post. She advises Link that Vah Naboris draws energy from its feet, so he must attack them with Bomb Arrows and to stay close by her when the Thunder Helm is active to avoid being struck by lightning created by the Divine Beast. After they succeed in disabling Vah Naboris, Riju will wish Link luck as he enters Vah Naboris.

After Link appeases Divine Beast Vah Naboris, Urbosa will take it to Spectacle Rock to take aim at Hyrule Castle. After that, when Link returns to her, she will thank Link for his help as they won't be bothered by the Divine Beast anymore. and rewards with Urbosa's Scimitar of the Seven and the Daybreaker Shield.

Riju is on her throne during the day, but when the sun sets, she goes into her room to play with her plush sand seals.

In the Air and Lightning Scenario, Riju and Patricia burst out of the Gate of Time and ram into Thunderblight Ganon when it was about to kill Urbosa. When questioned by the Gerudo Champion about her sudden presence,[17] Riju simply tells her to stay focused on the fight for now.[18] Thunderblight Ganon's speed began to overwhelm them,[19] as Riju chastises herself for thinking she was strong enough to protect her.[20] Urbosa assures Riju that the least she did was buy enough time for help to arrive as Link and his friends appear,[21] and they managed to slay Thunderblight Ganon, saving Urbosa, Riju, and Divine Beast Vah Naboris. Urbosa is too tired to join them, and she uses Naboris's lightning power to strike the top of Mt. Rhoam to release an updraft, while Riju joins Link's so they can reach Vah Medoh to save Revali and Teba from Windblight Ganon. After the battle, Urbosa and Riju board Vah Medoh as the former thanks Princess Zelda for helping them out earlier. She also thanks Riju for saving her life earlier,[22] while Riju politely refuses to take credit and states that they fought as one.[23] After Teba saw how abrasive Revali was to Link and was about to comment on it before Urbosa cuts him off before asking Princess Zelda on Hyrule Castle's fate.[24]

In the EX Liberate the Ancient Lab Guardian of Remembrance Scenario, Riju and Urbosa help protect the Royal Ancient Lab and the Science Academy from Ganon's monsters and Master Kohga's clansmen that were bothering them. When the battle comes to an end, with the Hylian and Gerudo regrouping, Riju was holding the Thunder Helm when Urbosa compliments her handling of it.[25] As Riju puts in on her head and tries to explain her duties,[26] Master Kohga suddenly swipes it from her and places it on his top knot and taunts Urbosa that her lightning attacks won't work on him, but the Gerudo Champion proves him wrong by using Urbosa's Fury and effectively shocks him into submission, making him drop the helm so that Riju can retrieve it. When the stunned Master Kohga demands to know how she still did it, Urbosa harshly replies that it would take him a hundred years or more to master the helm's power.[27] Furious, Master Kohga retorts that even if it took him that long, he would eventually have it before vanishing in a puff of smoke, as the Chieftains have a moment to catch their breath.

In the Each Step Like Thunder Scenario, Riju is discouraged by the horrors of the war through the sight of the corrupted Guardians and the monsters.[28] Urbosa notices and tells her that she didn't have to carry a defeatist attitude,[29] though Riju isn't entirely convinced.[30] Urbosa lets her know that she is the reason why she is still alive and still the pilot of Vah Naboris and wagers that they cannot be stopped.[31] Riju starts to ease a bit,[32] as Urbosa asks for her hand,[33] which Riju accepts,[34] and she is pulled into action. Just when they thought they had really won the battle, enemy reinforcements appear, which frustrates Urbosa,[35] and it was Riju's turn to give her a pep talk,[36] putting Urbosa in a better mood.[37] Thankfully, Mipha, Daruk, and Revali arrive right on time to bring down the reinforcements, with Urbosa musing over how long it took them to get here.[38] This battle was a major turning point for Hyrule when Princess Zelda awoke her power to save Link from Astor and the revived Blight Ganons, Purah activating a failsafe to deactivate almost every Guardian, and Master Kohga and the surviving Yiga Clan allying with Hyrule after Astor had betrayed them through blood sacrifice to revive the Blights.

In the All Hyrule, United Scenario, the present and future Champions, the Divine Beasts and the armies of every race in Hyrule have been summoned by Purah, through the supercharged Sheikah Tower, to Hyrule Field. Riju is more optimistic as she is enjoying the sights,[39] as Urbosa lets Zelda know that they are awaiting her orders.[40] With her surviving father's approval, Princess Zelda gives a speech to the troops and reminds them that Hyrule is their home and as long as they are not divided but united, they cannot be stopped. They rush to the outposts to take control and defeat the monsters that are generating the barrier around Hyrule Castle, so the Champion Pilots can open fire upon Ganon. Despite the Blood Moon's appearance reviving the monsters a few times, the army managed to push through.

In The Future of Hyrule Scenario, Princess Zelda leads the ground troops as Revali and Teba led the aerial army as they move in on Hyrule Castle where Harbinger Ganon and Astor were waiting, as the latter goes on a mad rant that it was his fate to bring down Hyrule. They battled the Blight Ganons one last time and managed to slay them for good before confronting the villainous duo and defeating them as well. Astor finally breaks down as he frantically orders Ganon to consume them, but he himself is consumed by Malice in order to take on a new form: Calamity Ganon. During the transformation, Terrako becomes corrupted and turns on Link and Zelda, who were forced to fight it. After Terrako is defeated, Riju and the Champions have a moment to mourn Terrako's broken state with Zelda, who is now more determined to stop Ganon once and for all. They head upstairs into the Sanctum where Calamity Ganon was waiting for them. The monster proved to be too much for them in the beginning as it shrugged off their attacks, forcing Zelda to try and defeat it with her magic. It brings Terrako back up and it runs upstairs and leaps between her and Ganon to break down the latter's invincibility, allowing the warrior to effectively damage it. When Ganon is wounded, Link uses the Master Sword to slash Ganon and the Princess uses her power to destroy it for good. With the people of Hyrule rejoicing over their victory, the Champions have a moment to enjoy the restored peace until Terrako's blessed screw sends Riju, Sidon, Yunobo, and Teba back to their own time. Urbosa assures Riju that she will lead her people well,[41] with the latter stating that it was an honor to fight alongside her.[42] Princess Zelda expresses eternal gratitude for their efforts and as they vanish, she wishes light to shine in their future for all time.

In the secret DLC ending, Riju and Urbosa are seen sand seal surfing together through the desert night and having a great time, and they are later seen with the present and future Champions as Terrako amuses them.