The Future of Hyrule

From Zelda Dungeon Wiki
Jump to navigation Jump to search
Want an adless experience? Log in or Create an account.
The Future of Hyrule 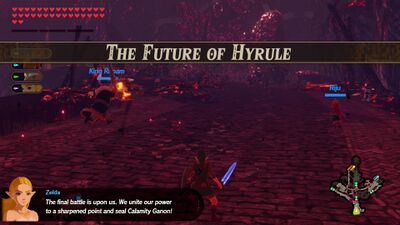 "The party arrives at Hyrule Castle. In order to defeat Calamity Ganon and protect the future of Hyrule, Zelda and the others begin the final showdown."

The Future of Hyrule is the final scenario of Age of Calamity Chapter 7.

"The party blazes a path through the battle, at last reaching Hyrule Castle. There they encounter Astor, as well as a Guardian eerily similar to the one that has stood by Zelda throughout her adventure. This new Guardian is black and seethes with Malice."

The Future of Hyrule [text]

"Through their perseverance, Link and the others overcame the monsters who had been revived by the Blood Moon, thus clearing the way to Hyrule Castle. Before them, their final confrontation awaited."

"Astor and the black Guardian are on the brink of defeat, yet victory still eludes the heroes. As Astor attempts to command Calamity Ganon, the seer is instead consumed by Malice, allowing a new, terrifying form to emerge."

The Princess's Most Devoted Protector

"In the face of Calamity Ganon's devastating power, the party is pushed onto the defensive. As Zelda desperately fights to protect everyone, the little Guardian, now recognized as Terrako, musters every last ounce of its strength to deliver one final attack against Calamity Ganon."

"The knight uses the sword that seals the darkness to deliver a devastating slash. The princess uses her sealing power to imprison Calamity Ganon... Thus the legend is realized, and the battle against Calamity Ganon is ended. Peace returns once more to the land."

"The heroes who have travelled across time return to their origins through the final remnants of Terrako's power. Zelda and the others bid them farewell and pray that the light stays with them in their world."