From Zelda Dungeon Wiki
Jump to navigation Jump to search
Want an adless experience? Log in or Create an account.
Air and Lightning 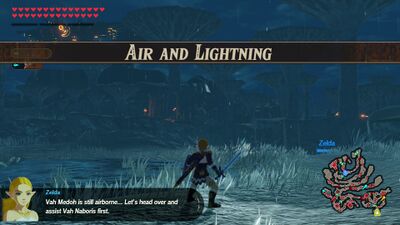 "Revali and Urbosa are in danger thanks to Calamity Ganon's monstrous creations. The party rushes toward the Divine Beasts to help them before it's too late."

Air and Lightning is the third listed and final scenario of Age of Calamity Chapter 5.

"The time-traveling Guardian contained records with a depiction of the four Divine Beasts falling under the control of Calamity Ganon."

Rescue Across Time: Wind and Thunder

"Revali and Urbosa are both locked in pitched battles against the powerful phantoms Calamity Ganon created. Just as all seems lost, however, mysterious figures from the most unlikely of places arrives to save them."

Avatar of the Calamity: Thunderblight Ganon

"Urbosa and Riju find themselves pushed to their limits in their battle against Thunderblight Ganon aboard Vah Naboris. Fortunately, just as all seems lost, rescue finally arrives."

Avatar of the Calamity: Windblight Ganon

"Revali and Teba fight bravely against Windblight Ganon aboard Vah Medoh, but it is clear they are in a losing battle. Things seem bad for the winged heroes, but rescue arrives just in the nick of time."

"With the support of allies, the party subdues both Thunderblight and Windblight Ganon. There is little time to celebrate, however, as Zelda shares the news of the fall of Hyrule Castle."

"With the aid of Teba and Riju, who had appeared within the Divine Beasts, Link and his forces were bolstered. Together, they succesfully saved Revali and Urbosa."

"Having heard the news from Zelda of Hyrule Castle's fall, Revali takes Teba, and together they board Vah Medoh. The pair plan to use the power of the Divine Beast to halt the monsters and Guardians advancing on Western Hyrule."

"Sidon describes having been summoned by a voice, and Zelda realizes that the arrival of these new heroes is a result of time-traveling abilities the little Guardian has. Zelda offers her thanks to the little Guardian, though she remains aware of her own shortcomings."

"Astor's plan to betray the Yiga Clan has been revealed. As he mercilessly sacrifices clan members to revive the Blight Ganons, Sooga and Master Kohga steel themselves to fight against him. Astor sicks a Hollow on the pair without hesitation."