From Zelda Dungeon Wiki
Jump to navigation Jump to search
Want an adless experience? Log in or Create an account.
Fire Hinox 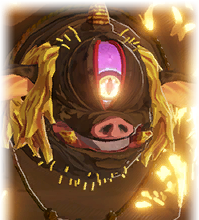 Fire Hinox from Age of Calamity

Fire Hinox are variants of the standard Hinox, appearing in Age of Calamity.

The Fire Hinox is one of the elemental variants of the standard Hinox, with their body engulfed in flames. They have brown skin, a purple eyeball, and orange and yellow facial features, distinguishing them from other Hinox. While they generally move and attack similar to a Black Hinox, the Fire Hinox does have its own elemental attacks, including the ability to shoot fire balls out of its mouth, which will bounce around the area until they hit a target. Additionally, a Fire Hinox will occasional ignite a nearby weapon, such as a wooden log, and then use it to attack, sending flame beams out at the nearby warrior.

Fire Hinox have a natural weakness to ice, making them vulnerable to attacks with the Ice Rod. Hitting a Fire Hinox with a direct hit from an Ice Rod will crack its life gauge, making it significantly easier to deplete the gauge and unleash a strong attack.

When defeated, a Fire Hinox may drop a Hinox Toenail, Hinox Tooth, or Hinox Guts. Additionally, the player will receive a Hinox Trophy each time one of these bosses are defeated. These can be used to complete quests or upgrade weapons of the various warriors.