From Zelda Dungeon Wiki
Jump to navigation Jump to search
Want an adless experience? Log in or Create an account.
Malice Igneo Talus 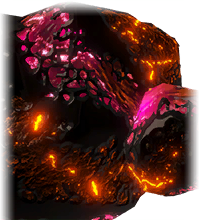 Malice Igneo Talus are bosses that appear in Age of Calamity.

Malice Igneo Talus are stronger variants of the Igneo Talus. They have more health and their attacks will deal more damage to warriors. Their bodies are engulfed in red flames, as well as purple malice, but overall, they function very similar to an Igneo Talus. They will launch flame based attacks by throwing boulders and smashing the ground in front of them. They will also leap into the area, attempting to fall down onto nearby warriors.

Malice Igneo Talus first appear during the All Hyrule, United, as well as during several of the later stage challenge levels. Given their flame attribute, they are naturally weak to ice attacks, making the Ice Rod super effective. Additionally, Remote Bombs work well in blasting away the rock arms of the talus, leaving them vulnerable momentarily.

After each Malice Igneo Talus is defeated, the player will receive a Stone Talus Trophy. These can be used to complete quests or upgrade weapons of the various warriors.