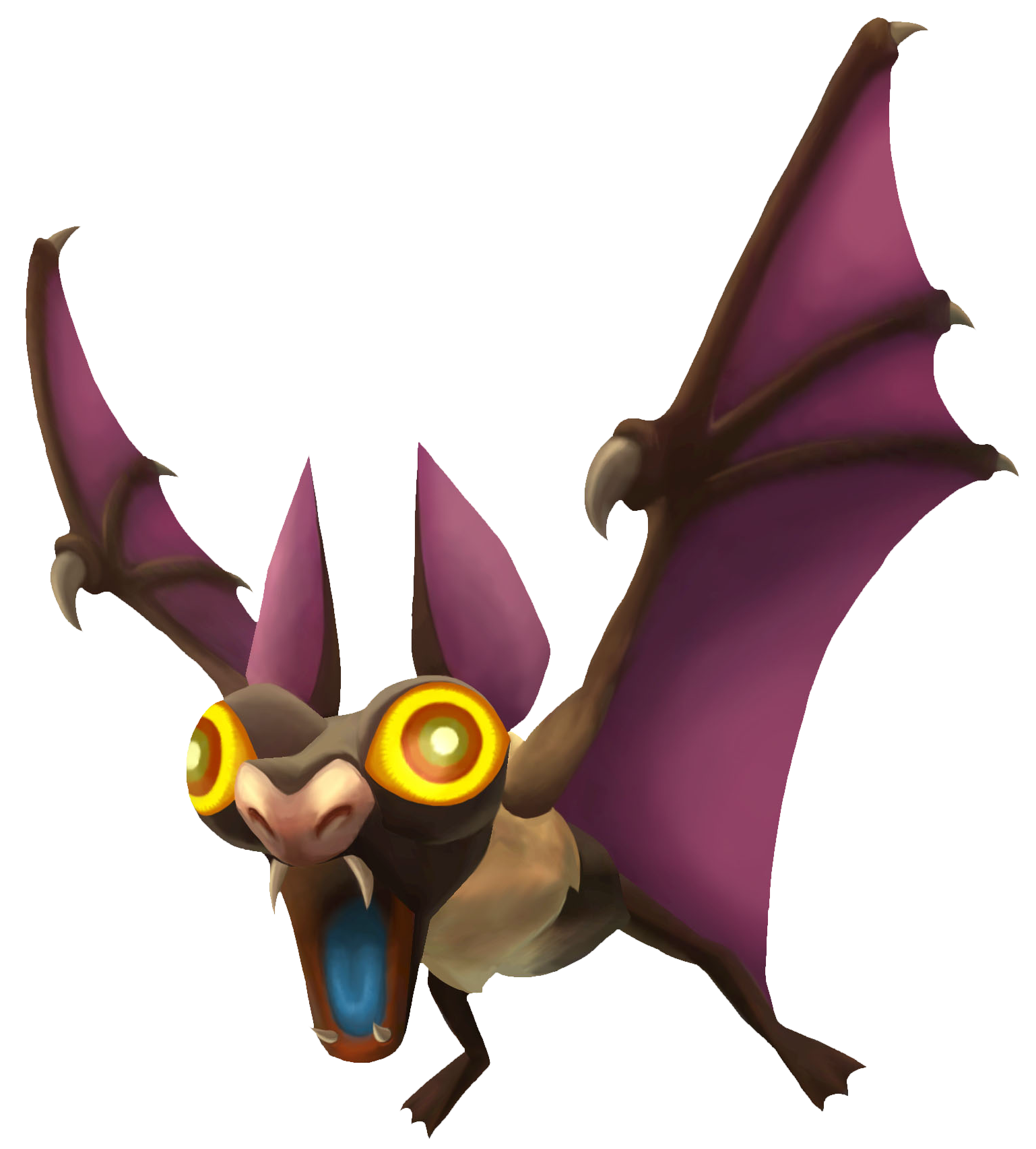 Keese are recurring enemies in The Legend of Zelda series. They are bat-like creatures, usually black-skinned, that attack Link by flying toward him and subsequently coming bumping into him, which deals damage. Keese are nimble creatures that prove to be more of a nuisance than a feared enemy. They are most often found in caves and dungeons, but they can sometimes be found in the Overworld as well.

There are also many variations on Keese, such as the Fire and Ice versions. In the latest 3D The Legend of Zelda titles, even more variations have been shown, including the Twilit, Thunder, and Dark variations.

Keese are featured in every dungeon in The Legend of Zelda. In fact, some dungeons have rooms with nothing in them besides large numbers of Keese. Additionally, Keese appear once a Vire has been damaged, at which point it will split into two Keese. One method of attack against the Keese are simple sword slashes, but that is not recommended as coming too close to them could result in contact, which will deal damage. The recommended method of attack is to use the Boomerang or Magical Boomerang, which kills them in one shot and doesn't require Link to come close to them.

In A Link to the Past, Keese will remain dormant and leave Link alone until he moves close to it.[1] As Link approaches a Keese will start to fly around, with its only to attack being to fly right into Link. Keese do not take much damage and are easily defeated with a wide variety of weapons. The Fighter's Sword and Boomerang will defeat a Keese with just one hit. Keese first appear within the Secret Passage as Link is escorting Princess Zelda to the Sanctuary. Beyond this early appearance, Keese mainly appear in the dark tunnels on Death Mountain. The Dark World counterpart to a Keese is a Chasupa.

This is an unused Dark World enemy that looked just like Light World Keese.[2] Its programming doesn't seem to exist in the game anymore, and its graphics can only be found in the Japanese versions of the game. It also has the ability to shoot fireballs at Link.

As usual, Keese in Link's Awakening only appear in caves and dungeons. They can be encountered as early as Tail Cave and behave in almost the exact same way as previous incarnations.

An example of a Keese from Ocarina of Time and Majora's Mask.

Keese are found in just about all dungeons within the game and are the basic enemies in Ocarina of Time. They can be killed with a wide variety of weapons, but projectile weapons, including the Slingshot, Boomerang, Fairy Bow, or the Hookshot work best. Every single weapon that Link has will defeat a Keese with a single shot, with the exception of Deku Nuts, which will only stun the enemies. In addition to regular Keese, Link will also encounter both Fire Keese and Ice Keese.

If a Keese has contact with flame, it will encase its outer body with fire, thus making it a Fire Keese. If Link has his Deku Shield equipped, and tries to defend against the Fire Keese, the shield will burn up. Fire Keese are commonly found throughout Dodongo's Cavern and the Fire Temple, but are also seen in places like the Spirit Temple.

If a Keese flies through Blue Fire, it will encase its body in ice, thus making it Ice Keese. These bats are a bit more annoying than Fire Keese, as well as more scarce. If Link comes in contact with an Ice Keese, it will freeze his body, slowly draining hearts. Link can easily defend against it with his shield, however, making them significantly easier.

Majora's Mask's Keese are almost exactly the same as the ones in Ocarina of Time. Following the trend, both Fire Keese and Ice Keese appear. They can be found in Ikana Well, Stone Tower, and the Stone Tower Temple. If Link wears the Stone Mask, he is invisible to Keese, making it handy for avoiding large groups of them. In addition, Majora's Mask features Bad Bats – large bat creatures similar to Keese that can be found pretty much everywhere and deal a bit more damage than their smaller counterparts.

Keese appear very often in Four Swords, most notably in Talus Cave. Their only attack is to fly into Link, but they can be killed with a simple slash of the Four Sword.

Fire and Normal Keese from The Wind Waker

Keese will make an attempt to fly into any of the Four Links. Any weapon found will easily defeat them.

Like in every other Zelda game, Keese are really simple to defeat but can be quite annoying. The best method is to keep away and hit them with the Boomerang. From close range, a simple sword strike will eliminate them as well.

In Twilight Princess, Keese look much more bat-like than in previous titles, which is likely due to the more realistic graphics of Twilight Princess. Just like their role in other The Legend of Zelda titles, Keese are more annoying than any actual danger (the exception being large groups of them, of course). If Link uses the Shield Attack on a Keese, it will fall to the ground and be vulnerable. The Spin Attack is a great method of attack against larger groups. Additionally, Link can also use projectiles weapons to kill Keese. The Hero's Bow, Slingshot, and Clawshot are all very useful against single Keese, but are not recommended to be used against groups.

Keese are found in dark areas, where they hang from the ceiling and wait for Link to approach. They are found in the Faron Woods, Forest Temple, Lakebed Temple, Castle Town Sewers, Deep Gorge, Lake Hylia Cavern, Kakariko Gorge Cavern, Temple of Time, City in the Sky, Cave of Ordeals, and Hyrule Castle. It is one of the more common enemies in the game.

There are three additional variations of Keese found within Twilight Princess: Fire, Ice, and Shadow.

Fire Keese are usually found in fire-type areas, such as the Goron Mines. Fire Keese are exactly like normal Keese, the only difference being they are engulfed in fire constantly. Because of this, if one comes in contact with Link while he is using the ordon or Wooden Shield, it will burn up due to their wooden material. However, they will have no effect on the Hylian Shield, so it is recommended to have that shield equipped when traveling to fire-based areas that may contain Fire Keese. Projectiles weapons are most effective against Fire Keese as they prevent Link from having to come close to them.

Fire Keese are found in the Goron Mines, Bridge of Eldin Cavern, and Cave of Ordeals.

Ice Keese are the third variation of Keese found in Twilight Princess. Similarly to a Fire Keese, the only thing that differentiates these guys and normal Keese is the fact that Ice Keese are engulfed in frost. Because of this, they are mostly found in cold areas, like the Snowpeak mountain range. They are easily one of the most annoying enemies in the game because they freeze Link upon contact, dealing a quarter heart of damage for every second Link is frozen. They can be pretty difficult in large groups. If they are, it is a bit easier handling them with Wolf Link, because he is so much faster. Link can stun them with the Gale Boomerang, making them significantly easier to defeat.

Ice Keese are found in Snowpeak, the Snowpeak Top, Snowpeak Ruins, and the Cave of Ordeals.

Keese appear as a relatively simple enemy in Phantom Hourglass. They are found in almost every cave, and are easily defeated with a hit from any weapon. Their design is similar to the Keese in The Wind Waker.

Fire and Ice Keese appear as well, burning and freezing Link upon contact. Because of this, they can't be defeated with the sword.

Keese return in Spirit Tracks and they are identical to their Phantom Hourglass counterpart. As one of the weakest enemies in the game, Keese will do a 1/4 heart of damage if they attack Link and they can be defeated with a single sword slash.

Fire and Ice Keese also appear as well, and these variants cannot be defeated with Link's Sword. If Link uses the Whirlwind on a fire or ice Keese, they will lose their ice or flame, then making them vulnerable to sword attacks. Fire and Ice Keese are usually found near a source of their respective element, and if they fly back into that element they will gain their coat again.

Keese reside in the overworld and within dungeons. When they swoop low enough to be within reach, Link can use a sword slash to defeat them, though Keese can be defeated with almost weapon in Link's arsenal. For example, Link can defeat multiple Keese at once with a single crack of the whip.

Following the game's art style, Keese have a somewhat cartoonish and very colorful appearance. As with the most games, variations of regular Keese also appear.

Dark Keese are an enemy in Skyward Sword. If Dark Keese touches Link he becomes cursed and will not be able to use any of his items or equipment including his sword. Because of this, be extra careful when facing them.

Fire Keese can be found around Eldin Volcano. They can still be defeated with the sword, but if they touch Link he will catch on fire.

This new variation of Keese, named Thunder Keese, resides in the Lanayru Mining Facility. They are yellow in appearance, and, like many enemies there, surround themselves with electricity when attacking. Wait until the sparking stops to strike. 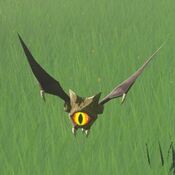 Keese are found roaming the overworld at night or can be found in small caves. One will attempt to charge at you, while its eye glows red. They have just 1 HP and tend to drop Keese Wings or Keese Eyeballs Sometimes they will attack in hordes in open fields at night.

Fire Keese are the variant of Keese found in the Eldin region, specifically Death Mountain. They are engulfed in flames and will charge at Link to try and set him alight, which can cause his equipment to burn.

This type of Keese makes their home in the cold regions of Hyrule, such as the Gerudo Highlands. They will charge at Link and freeze him solid, which leaves him vulnerable to other attacks.

Electric Keese are found at night in the Gerudo Desert, but also make their home in forests such as the Faron Woods. They will charge at Link, which may cause a devastating shock, causing Link to drop his metal weapons.

Keese appear in Battle Quest in a very similar fashion as their previous appearances. They usually travel in packs and will try to fly right into Link. Link can defend himself using his shield or he can place a well timed sword attack to defeat a Keese in one strike. They will also fall to one arrow from the archer.