From Zelda Dungeon Wiki
Jump to navigation Jump to search
Want an adless experience? Log in or Create an account.
Phantom Eye 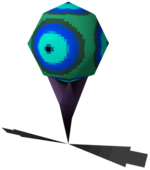 Phantom Eyes are small enemies seen in Phantom Hourglass and Spirit Tracks. They act as sentries that patrol the Temple of the Ocean King and the Tower of Spirits. Though they do not have their own method of attack, Phantom Eyes are able to alert the powerful Phantoms if Link is spotted by them. They are also able to latch onto Link after sighting him, slowing his movement speed and forcing him to either rub them off with the stylus or reach a Safe Zone.

Phantom Eyes survey the area in the Temple of the Ocean King. They can be stunned with the Boomerang and be easily dispatched with the sword or Bow. Using a Bombchu is also an effective strategy.

In this instance, Phantom Eyes are found to be patrolling the Tower of Spirits. As a Warp Phantom, Zelda can teleport to any Phantom Eye on the current floor, even areas where Link himself cannot reach.