From Zelda Dungeon Wiki
Jump to navigation Jump to search
Want an adless experience? Log in or Create an account.
Whip

The Whip is a relatively new item in The Legend of Zelda series first appearing in Spirit Tracks. It is used to reach distant ledges, as well as to stun enemies. 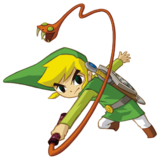 The Whip is acquired in the Ocean Temple after Link defeats a Snapper. It is used to cross gaps and activate fish-shaped switches, as well as attack enemies. The Whip can be used to grab objects that Link cannot pick up on his own, such as the shields of Zora Warriors and the helmets worn by Helmet ChuChus, which can then be thrown back at them or at other enemies. The Whip is necessary to defeat the boss of the Ocean Temple, Phytops, by plucking barbs from its tentacles and using them to expose and attack its eye.

In Whittleton, Link can participate in a mini-game known as the Whip Race. The prizes include a Bomb Bag and a Heart Container.