From Zelda Dungeon Wiki
Jump to navigation Jump to search
Want an adless experience? Log in or Create an account.
Four Swords 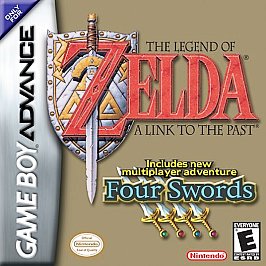 The Legend of Zelda: Four Swords is a game for the Nintendo Game Boy Advance. It was released alongside a re-release of A Link to the Past.

Long ago, in the Kingdom of Hyrule, there appeared a Wind Sorcerer named Vaati. Vaati could bend the wind to his will and used this awful power to terrorize many villages of Hyrule. In his assaults on the villages, Vaati would kidnap any beautiful girls who caught his fancy.

Many knights from the castle and other brave men set out to subdue the sorcerer and rescue the girls, but each one fell in turn to Vaati's awesome power. Just as the people had begun to lose hope, a lone young boy traveling with little but a sword at his side appeared.

When this young boy heard what was happening, he said only, "I will defeat this sorcerer." He boldly entered Vaati's palace, mystically trapped the evil sorcerer inside the blade of his sword, and returned the young girls to their villages. The boy then went deep into the forest and disappeared.

The villagers asked the girls how a boy so young could have saved them all and defeated the sorcerer when no one else could. The young girls told a story of how with just a wave of his sword, the boy's body shattered into four pieces, each of which then formed a complete copy of the boy. These four young boys then worked together to defeat the sorcerer. The people did not believe the story, but they called it the Four Sword nonetheless. As rumors of the blade's power to divide a person into four entities spread, the people built a shrine to protect it.

Zelda of the land of Hyrule was a beautiful young girl born with mysterious power to sense approaching forces of evil. For this reason, she was assigned with the sacred duty of protecting the shrine of the Four Sword and the blade itself. One day, Zelda was in Hyrule Castle when she sensed that something unusual was occurring at the Four Sword Shrine. She asked a boy named Link, whom she trusted above anyone else, to accompany her to investigate the happenings at the shrine..."

The game starts with Link and Zelda in the sanctuary of a blade known as the Four Sword that had sealed away the evil Wind Mage, Vaati. Link draws the sword, releasing Vaati, who then kidnaps Zelda. Upon drawing the sword, Link splits into four heroes in variously colored tunics, working together to save Zelda. The object of the game is to complete levels and receive the multiple silver keys from the Fairies at the end of each level. Once a key is obtained from each of the three main levels, Vaati's Palace appears. Link travels through the palace and defeats Vaati, sealing the Wind Mage back into the Four Sword.

On September 28, 2011, Nintendo released an updated version of Four Swords on DSiWare, as part of Zelda's 25th Anniversary. Nintendo took the download down from the eShop on February 20, 2012. To celebrate A Link Between Worlds, Nintendo made the download available again for North American gamers from January 30, 2014 until February 2nd, 2014. This version of Four Swords contains a new one player mode in which you can control 2 Links. It also features 3 new stages, based on The Legend of Zelda, A Link to the Past, and Link's Awakening. Four Swords Anniversary Edition also no longer includes A Link to the Past.

There are a number of stages in Four Swords, especially the Anniversary Edition. They are listed below.

There are four stages to choose from at the start of the game. They are: Chambers of Insight, Sea of Trees, Death Mountain, and Talus Cave. Chambers of Insight is a tutorial level, and it isn't necessary to complete it to finish the game. At the end of each of the other three, you will be granted a Silver Key, providing you have gained as a team a total of at least 1,000 Rupees. After you have collected the three Silver Keys, Vaati's palace will appear. You will only be able to go through the first door, however.

After you have finished the first door in Vaati's Palace, you will unlock the Realm of Memories. This has three doors, each one unlocking the next. The first one is based on A Link to the Past, the second is based on Link's Awakening, and the third on the original The Legend of Zelda. After you complete these three, you will receive the Master Sword, which allows you to shoot beams when your health is full.

When you have received a total of 30,000 Rupees, you will unlock the Hero's Trial. These stages are hard and have more enemies than any other level in Four Swords. The Hero's Trial has three doors again, each unlocking the next.

Once you have Hero's Keys for the 3 main stages, you unlock the final door in Vaati's Palace, a 12-floor dungeon featuring a blend of stages.