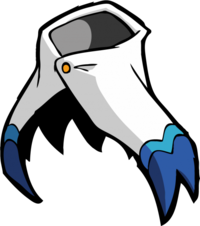 Named from a large mythological bird, Roc's Cape is an enhanced version of Roc's Feather. It allows Link to jump and glide over larger holes than with Roc's Feather. In addition, when paired up with the Pegasus Boots, the jump effect is increased.

The Roc's Cape is an upgrade to the Roc's Feather in Oracle of Seasons. It is found in the Explorer's Crypt and allows Link to glide through the air.

Roc's Capes can be found randomly on Item Podiums throughout Hyrule. They allow Link to glide through the air for short distances. If Link picks up another item from a pedestal, he discards the Roc's Cape, placing it back on the pedestal.

Roc's Cape is located in the Palace of Winds. As in past installments, it allows Link to glide through the air. It is also needed to learn the Downward Thrust from Swiftblade. In Hyrule Town, Link can use the Roc's Cape to jump into the town bell to obtain a Piece of Heart.

The Roc's Feather is named after the Roc, a type of mythical gigantic bird.