From Zelda Dungeon Wiki
Jump to navigation Jump to search
Want an adless experience? Log in or Create an account.
Ghini 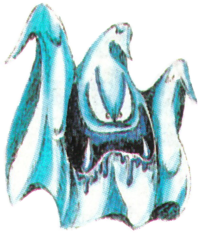 Ghini Artwork from The Legend of Zelda Instruction Booklet

Ghini are recurring enemies in The Legend of Zelda series. They are comparable to Poes, due to the fact that they typically inhabit graveyards or other dark areas.

Ghini in The Legend of Zelda are found exclusively in the graveyard.[1] There are two types of Ghini in this game,[2] one that appears on each screen of the Graveyard from the beginning[3] and one that appears if Link touches a gravestone.[4] Furthermore, if Link defeats the original Ghini on the screen, all of the Ghini presently on the screen disappear. Ghini have the same attacking power as Armos.[5]

Ghini patrol the Cemetery area of Koholint Island in Link's Awakening. They are typically accompanied by Zombie creatures that come up from underground.

A single over-sized Ghini can be found at the top-right of the four graveyard screens. It has virtually the same characteristics as a standard Ghini and even takes the same number of hits to defeat.

Ghini appear in the graveyard and the Explorer's Crypt in Oracle of Seasons. It takes one strike from the Rod of Seasons to defeat a Ghini.

In Oracle of Ages, Ghini are found in the Yoll Graveyard, the Spirit's Grave, and the Ancient Tomb in Labrynna. There is also a larger Ghini, called the Giant Ghini, which is the Mini-Boss of the first dungeon, the Spirit's Grave.

In Four Swords Adventures, Ghini appear as enemies in levels in the Near the Fields stage. They also appear during the boss battle with Jalhalla. There are both small varieties and larger ones.

The Ghini in The Minish Cap reside in the area of Royal Valley and in Dark Hyrule Castle. They attack anyone who is near them. Similarly to Gibdos and ReDeads, they attempt to grab Link and start sucking the life force away from him once a Ghini grabs him. In this game, they are much more animated, licking Link upon contact.

There is one female Ghini named Gina, who lives inside of a tombstone. She is a pink, friendly Ghini who will gladly fuse Kinstone piece's with you and she has plenty of them to fuse with Link.

In A Link Between Worlds two different types of Ghini exist: Dark and Light. Ghini will appear in dark rooms, where they are able to attack without being seen. To defeat them, the room must be lit in some way or an item like the Fire Rod must be used. Even if the room is lit some Ghini will not turn white; these enemies are considered Dark Ghini.

Ghini function in the same fashion as they do in The Wand of Gamelon.

Ghini are ghost-like enemies that will appear from various portions of the screen as they try to fly towards Zelda. The beam blade works best if Zelda is at full power, but if not, it is best to avoid these ghost-like enemies at all cost. Unlike many other enemies, Ghini lack the intelligence to turn around. There are white and green variants of the Ghini, but they are identical to one another. If they must confronted head on, the best way to defeat them without taking damage is a well-timed jump and sword slash, hitting the Ghini in its head before it can make contact with Zelda.