From Zelda Dungeon Wiki
Jump to navigation Jump to search
Want an adless experience? Log in or Create an account.
Spirit's Grave

Spirit's Grave is the first major Dungeon featured in Oracle of Ages. It is located at the southeast corner of Yoll Graveyard. Inside, Link will acquire the Power Bracelet as he battles the Giant Ghini and the dungeon boss, Pumpkin Head. The main reward is the first Essence of Time, the Eternal Spirit.

After saving the Maku Tree in the Past, Link can visit her in the present to acquire the Seed Satchel, along with some Ember Seeds. Link can use these seeds to burn the small bush and enter the Yoll Graveyard. 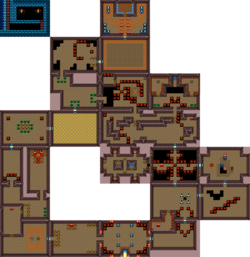 The Spirit's Grave is rather linear dungeon, all taking place on a single floor. The dungeon is filled with simple, but eerie enemies such as Stalfos, Wallmasters, and Ghinis. Seeing that it is the first dungeon of the game, most of the enemies are easy to defeat, such as Keese, Zols, and Ropes. Likewise, the puzzles are also rather simple, many of which require a single pushing a of a block.

In one of the early rooms, Link will find a colored cube. This block has six sides, two of which are Red, two are Yellow, and two are Blue. In this particular puzzle, Link simply needs to push the block up three times, so that it lands in the hole with the color Blue facing up. This is a rather simplistic puzzle, but similar, albeit much more advanced block puzzles of this nature appear in future dungeons.

In addition to finding the standard Dungeon Map, Compass, and Boss Key, there are a few additional Treasure Chests that contain other items. All together, Link acquires 3 Small Keys through the dungeon, several which are inside Treasure Chests. Link will also find a Gasha Seed and a pair of Magical Rings.

In the room where Link acquires the Compass, there is a hidden wall at the west end of the screen. Link can use his Ember Seeds to burn the wall, allowing him to pass. Inside, Link will find a Treasure Chest containing a Seed Ring. When appraised, this becomes the Power Ring L-1. The second Magical Ring is found inside of a treasure chest at the west portion of the dungeon. This seed ring, when appraised, will become the Discovery Ring.

The Giant Ghini acts as the dungeons mini-boss. Similar to its incarnation from Link's Awakening, this version is slightly stronger and is surrounded by three smaller ghosts. Link can get rid of the pesky small ghosts with a single sword slash, and he can then attack the Giant Ghini. Link must act fast though, as the smaller ghosts will respawn quickly.

Pumpkin Head serves as the dungeon boss of Spirit's Grave. Link can swipe at Pumpkin Head, causing its body to disappear and its head to fall to the ground. Link can then lift the head using the Power Bracelet, revealing the actual small ghost inside. The ghost is then vulnerable to Link's attacks. Repeat this process and keep swiping at the small spirit to defeat Pumpkin Head. Link will get a Heart Container, as well as the first Essence of Time, the Eternal Spirit.