From Zelda Dungeon Wiki
Jump to navigation Jump to search
Want an adless experience? Log in or Create an account.
Yoll Graveyard 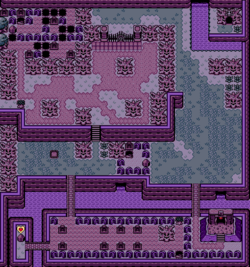 Yoll Graveyard is a location in Oracle of Ages. It is located at the east portion of Labrynna in the Present. It is one of the regions that Link journeys to along his quest. The first dungeon, Spirit's Grave, is located deep within the Graveyard and it holds the first Essence of Time, the Eternal Spirit. The Yoll Graveyard is also where Link first meets Moosh on his journey to Cheval's Tomb to acquire the Zora's Flippers and the Cheval Rope.

Yoll Graveyard is located at the east end of Labrynna in the Present time period. The Graveyard has just a single entrance and it comes from the Forest of Time to the west. The Yoll Graveyard borders the Rolling Ridge Base to the north and the Crescent Strait to the south, but there are no direct entry points to either region from the Graveyard.

After Link saves the Maku Tree in the Past and then returns to her in the future, Link is awarded the Seed Satchel and some Ember Seeds. The Maku Tree informs Link that he needs to acquire the eight Essences of Time in order to save Nayru. She senses the first one at Yoll Graveyard.[1]

After traveling to the Forest of Time, Link can see a sign near a small bush pointing to the Yoll Graveard. Link must use an Ember Seed to burn the tree and gain access to the Graveyard.

Initially, Link does not have access to the full graveyard. There is a key lock near the north end of the Graveyard, preventing Link from passing.[2] Link needs to travel to acquire the Graveyard Key to advance further within the area. Near the south end of Yoll Graveyard, Link finds a trio of kids talking about a secret grave hidden beneath a tree. The three kids eventually get scared and run off.[3][4][5]

Later in the quest, after Link has completed the second dungeon, the Wing Dungeon, he returns to the Yoll Graveyard. Here he finds one of the possible Animal Companion, Moosh. This giant blue bear is being tormented by three Ghinis and Link can help him out. After defeating the Ghinis, Link is able to use Moosh as he navigates through the Yoll Graveyard. Using Moosh, Link can access Cheval's Tomb, located at the northwest corner of Yoll Graveyard.

At the southwest corner of Yoll Graveyard, Link finds a Piece of Heart. However, there is a stone that is blocking Link from acquiring it. After Link gets the Power Bracelet from Spirit's Grave, he can lift this stone and acquire the heart piece.

One screen south of the entrance to Yoll Graveyard, Link can find the lone Soft Soil location within the Yoll Graveyard. Here, Link can plant a Gasha Seed that will eventually grow to become a Gasha Tree and give off a Gasha Nut.

This location also plays a part in the trading sequence; in fact, it is here where the sequence begins. In the center of the Yoll Graveyard, Link finds the Clock Poe floating around near a grave. He cannot reach him until after he has acquired the Power Bracelet from Spirit's Grave. After Link is able to speak with the Clock Poe, he mentions that the headstone is blocking his pathway to the afterlife.[6] After moving the headstone for the Clock Poe, he thanks Link by giving him the Poe Clock,[7] the first item in the trading sequence. Link later uses the Poe Clock to acquire the Stationery.

The Spirit's Grave is the first dungeon featured within Oracle of Ages and it is the main attraction found within Yoll Graveard. The dungeon is located deep within the graveyard, at its southeast corner. Link needs to acquire the Graveyard Key in order to access this portion of the Yoll Graveyard. Inside the dungeon, Link acquires the Power Bracelet, giving him the ability to lift objects. Link later battles with the mini-boss in the form of a Giant Ghini and the dungeon boss, Pumpkin Head. As a reward for completing the dungeon, Link receives a full Heart Container as well as the first Essence of Time, the Eternal Spirit.

Syrup's Potion Shop is located at the northeast corner of Yoll Graveyard. However, it is on the other side of a small pool of water. Link requires the Zora's Flippers to reach the shop. Inside, Link can purchase Gasha Seeds, Magic Potions, and one Piece of Heart.

Cheval's Tomb is located at the northwest corner of Yoll Graveyard. Link needs to use Moosh to fly over the pitfalls in this area in order to reach the grave. Inside, Link will find the Zora's Flippers, which will allow him to acquire Cheval Rope, an item needed by Rafton to build a Raft.

In the Past, water had surrounded this region, isolating it from the main landmass of Labrynna. The area is not a Graveyard at all and instead, it is the Sea of No Return. This region isn't accessible until late in the game, after Link travels through an underground cave on Crescent Island.

The Sea of No Return is one of the only areas in the entire game where Link is unable to successfully play the Tune of Ages. If Links attempts to play the Tune, he will start to transition to the Present, but will be brought back by a Mysterious force, preventing him from entering the Yoll Graveyard in this fashion.[8] Similarly, Link cannot use the Tune while in the Present.