From Zelda Dungeon Wiki
Jump to navigation Jump to search
Want an adless experience? Log in or Create an account.
Cheval's Tomb 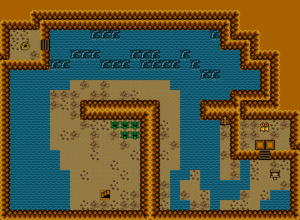 Cheval's Tombs is a location found within the Yoll Graveyard of Oracle of Ages. It is the final resting place for the inventor Cheval.

After completing the Wing Dungeon, Link's next primary destination is at Crescent Island. Before he can journey there, he must acquire the Raft which is made by Rafton. However, in order to acquire the Raft, Link must first acquire Cheval Rope.

The inside of Cheval's Tomb consists of a watery maze with several of Cheval's inventions waiting to be collected. The tomb is also littered with enemy Hardhat Beetles and Red Zols. At the southeast corner of the Tomb there is a sign that reads, "I shall entrust my invention only to one with both might and light feet."[1] Using a combination of the Power Bracelet and Roc's Feather, Link can pull the lever and make it passed the closing blocks to reach the reward of the Zora's Flippers.

Using the Zora's Flippers, Link can now swim in the shallow water that makes up the Tomb. Taking the upward path at the top-right of the tomb, Link will make his way to the top-left part of the tomb where he will find Cheval Rope.

After leaving the Yoll Graveyard, Moosh will give his farewell. If Link laters acquires Moosh's Flute, he can return to Cheval's Tomb at any point. However, if Link gets Ricky or Dimitri as his animal companion, Link will not be able to reenter the tomb. However, there is nothing of use within the tomb after acquiring the Cheval Rope.