From Zelda Dungeon Wiki
Jump to navigation Jump to search
Want an adless experience? Log in or Create an account.
Ricky 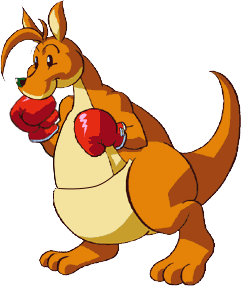 Ricky is a character that appears in Oracle of Seasons and Oracle of Ages. He is a boxing Kangaroo who can perform amazing jumps that allow Link to scale cliffs and jump over pits. Ricky also has an attack where he can charge up his punch and release a whirlwind. He can also be called to almost any location with Ricky's Flute.

Ricky is first encountered near Blaino's Gym. He tells Link that he has lost his gloves to his rival Blaino after losing a fight against him. He then asks Link to defeat Blaino in a match and win back his gloves. After Link helps Ricky, Ricky helps him jump over pits so that he can make it to Spool Swamp, and later, Poison Moth's Lair.

If Link has not obtained a Strange Flute before entering Natzu, Ricky joins him and gives Link Ricky's Flute.

Ricky, the boxing kangaroo, is the second of the three Animal Companions that Link encounters. Once discovered in the forests east of Lynna City, Ricky requests that Link finds his lost Gloves. The Gloves can be found on the beach south of Lynna City, buried beneath the sand near a tree. Ricky returns the favor by assisting Link in scaling the cliffs and obstructions leading up to where Tingle is floating, located just south of where Ricky is found. Here, Link obtains the Island Chart. Once Link has obtained the second item needed to sail to Crescent Island, Ricky leaves, stating the he cannot stand Tingle.

Ricky carries Link in his pouch, as opposed to the other two Animal Companions allowing Link to ride on their backs. Ricky's special ability allows him to jump up and on to cliffs which are too high for Link to scale on his own, as well as single holes in the ground that Link cannot maneuver around. Among Ricky's attacks are a regular punch, as well as the Tornado Punch, in which Ricky charges a powerful punch that, when executed, releases a whirlwind that surrounds enemies and carries them off.

After completing the Moonlit Grotto, but before traveling to the Nuun Highlands, Link can obtain what becomes Ricky's Flute by playing the Shooting Gallery mini-game in Lynna Village in the Past. Only during this time of the game is the Flute available, and Link must gain a score of 250 or higher to obtain it. If Link does receive the Strange Flute from the mini-game, then later, Ricky appears as the lost animal within the Fairies' Woods. After helping him out of the Woods here, the Strange Flute becomes Ricky's Flute, which Link can use to call for Ricky's assistance whenever he is needed in the Overworld.