From Zelda Dungeon Wiki
Jump to navigation Jump to search
Want an adless experience? Log in or Create an account.
Nayru 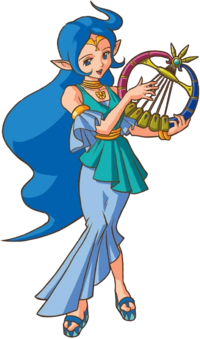 Artwork of Nayru from Oracle of Ages

Nayru is the titular character of Oracle of Ages, who also makes appearances in Oracle of Seasons and The Minish Cap. She is a singer from the land of Labrynna, who holds power over the passage of time.

After being sent by the Triforce to Labrynna, Link is led to Nayru's hiding place by Impa, the nursemaid of Princess Zelda, who has been searching for the oracle in an attempt to protect her from a great danger. Nayru is found singing in the Forest of Time, surrounded by woodland creatures and under the guard of her childhood friend, Ralph. After she is introduced to Link, however, Impa is revealed to have been possessed by Veran, Sorceress of Shadows, who has been seeking Nayru's power in order to spread darkness and sorrow over all of Labrynna. Taking possession of the oracle's body, Veran departs through a nearby Time Portal and retreats into the distant past, with Link and Ralph departing on separate endeavors in order to rescue Nayru from her grasp.

In the past, Veran enters the service of Ambi, the queen of Labrynna, who is overseeing the construction of a great tower that will guide her lover home from the sea. Using Nayru's powers, Veran is able to bring about a day that never ends, and manipulates Ambi into forcing her subjects to work endlessly toward the tower's completion. Doing so causes great sorrow and distress in the citizens of Labrynna, with the tower becoming a symbol of the queen's harshness and cruelty. Meanwhile, Link is tasked by the Maku Tree with gathering the eight Essences of Time, which together can repair the damage done to the flow of time and restore the Maku Tree's lost memories. He does this with help from the Harp of Ages to travel between past and present; Nayru hid the harp in her house in the hope that a hero would find it.

After gathering the sixth Essence of Time, Link and Ralph receive word that Ambi has left her palace, lowering its guard and giving them a chance to sneak in and free Nayru from Veran's influence. Link manages to do so by exploiting Veran's weakness to Mystery Seeds, but upon Ambi's sudden return, the sorceress opts to possess her instead, bringing the palace guards under her control and allowing work on the tower to continue unobstructed. Nayru brings Link and Ralph back to the present age and teaches Link the final tune for the Harp of Ages, which allows him to switch between past and present freely and is necessary to gather the last two Essences of Time.

After being rescued, Nayru retreats to the safety of her house in the Forest of Time, where she remains until the end of the game. After Veran is defeated, Nayru assures Link that Ralph will train to become stronger in order to protect her against any future dangers. She also informs him of events transpiring in the land of Holodrum, which Impa has already left in order to deal with.

Nayru does not appear in a standard playthrough of Oracle of Seasons. However, in a Linked Game where Oracle of Ages is completed first, she appears to aid Link following the defeat of Onox, General of Darkness. Nayru combines her power with that of Din, Holodrum's Oracle of Seasons, to grant Link access to the Room of Rites where Twinrova plans to resurrect Ganon. In the event that Oracle of Seasons is played first in a Linked Game, then the opposite scenario takes place, with Din appearing in Labrynna in order to join forces with Nayru.

Nayru is from a long line of Oracles from the Land of Labrynna. She can be found in the Happy Hearth Inn along with both Din and Farore looking for a house in Hyrule to move in to. By a series of Kinstone Fusions, Gorman begins to sell property in Hyrule Town, at which point Link is able to offer her a place she can live. Once Nayru is inside her new home, she offers to fill one of Link's Empty Bottle with Nayru's Charm, which temporarily cuts the damage he takes from enemies in half as well as turn Link's tunic blue.