This article is about the leader of the carpenters. For the king from Phantom Hourglass, see King Mutoh. 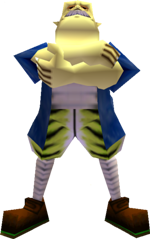 Mutoh is the boss of the Carpenters in Majora's Mask, Oracle of Ages, and The Minish Cap. In Ocarina of Time, he is referred to as the Master Craftsman.

In Ocarina of Time the leader of the Carpenters is referred to as the Master Craftsman.[1] He leads the carpenters in constructing the Shooting Gallery in Kakariko Village and later the bridge in Gerudo Valley.

In Majora's Mask, Mutoh is the boss of the carpenters in Clock Town. He can be found arguing with the Mayor and Captain Viscen in the Mayor's Residence about the evacuation. He wants to complete the tower he and his men are building in South Clock Town in time for the Carnival of Time. He fails to believe that the Moon will fall and that there is no danger that will stop him and his men from finishing the tower. However, on the Final Day, his men chicken out and run away, leaving him alone to finish.

If Link resolves the aforementioned dispute with the aid of the Couple's Mask, Mutoh vanishes until the night of the Final Day when he is seen cursing the Moon.

In Oracle of Ages, Mutoh is once more out of luck as his carpenters have vanished. They are required to build a bridge connecting the Nuun Highlands to Symmetry Village. He asks Link to find them.

In The Minish Cap, Vaati comes to the Hyrule Castle to attempt the theft of the Light Force and causes an earthquake. Afterwards, the King of Hyrule ordered that Mutoh and his carpenters must repair the broken parts of the location.[2]

For much of the game, Mutoh and the Carpenters can be found in a house at the south-west part of Hyrule Town. When speaking to Mutoh, he comes across as quite arrogant, implying that his ancestors, who built Hyrule Castle were able to do so since after all, they are Mutoh's ancestors.[3] Mutoh is prepared to take on any challenge that faces him.[4]

After fusing Kinstones with Bremor, Mutoh and the Carpenters will assist Gorman in building a house within Hyrule Town. These house can later be rented out to Din, Nayru, or Farore.

Link is able to fuse Green Kinstones at various points in the game with Mutoh. As it is a Green Kinstone fusion, it is not set to a specific Treasure Chest, but instead, one of the many possible Treasure Chests. There is one random Red Kinstone within the game that opens up a location in the Hyrule Castle Garden leading to a Piece of Heart, as well as a random Blue Kinstone that opens up a tree in North Hyrule Field leading to a Fairy Fountain. Mutoh is one of the many characters in which Link can make this Kinstone fusion with.

In Phantom Hourglass, a character named King Mutoh makes an appearance, but shares no characteristics with previous Mutohs whatsoever.