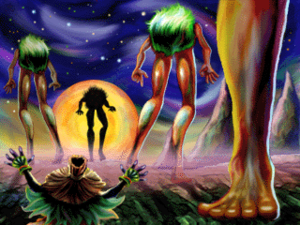 Artwork of the Four Giants in Majora's Mask

The Four Giants are characters from Majora's Mask. They are the guardian gods and creators of Termina. Long before the story of Majora's Mask, the people all lived together, and the Giants lived with them as they protected them. On the day of the harvest festival (later known as the Carnival of Time) where the people wore masks of the Giants to honor them, the Four Giants told the people that they shall continue to protect the people from their slumber. They then departed from the location where the Clock Tower would later be built, each walking 100 steps in each of the compass directions, where they slept. They told the people that if they had need of them, to loudly call and declare their plight, so that their voice may carry to the sleeping giants.

One day every year, atop the Clock Tower during the Carnival of Time, an ancient song is sung in a ceremony to call the gods. Whether this is a tribute to the Giants or the way the people actually called for their help is unclear.

One person was very shocked and sad that the Giants had chosen to sleep. That person was a little imp, the Skull Kid, who had been friends with the giants since before they created the four worlds. Feeling neglected, the Skull Kid was angry and repeatedly wronged the people. Eventually, they were overcome and called out to the Giants. They awoke and confronted the Skull Kid, roaring out, warning him that if he does not stop hurting the people, they will destroy him. The Skull Kid left, sad that he had lost his old friends.

During the events of Majora's Mask, the Four Giants have been sealed away by the Skull Kid to prevent them from trying to stop him. They each were each sealed within a mask, worn by four monsters guarding the Woodfall, Snowhead, Great Bay, and Stone Tower Temples. Upon confronting the Skull Kid atop the Clock Tower, Tael tells Link about the four locations, saying "The four who are there...Bring them here..."

After freeing the first Giant in Woodfall, Link is taught the Oath to Order (likely the song sung for the Giants atop the Clock Tower), and the Giant tells Link to call them. Without knowing the true nature of the Giants, Link frees the other three, gradually learning about their true nature as protective gods and then receiving a request to help their friend, the Skull Kid. Finally, the Giants tell them they should forgive the Skull Kid before once more telling Link to call them.

Atop the Clock Tower after midnight on the Final Day, Link plays the Oath to Order, causing the Four Giants to let out their cries and then appear to stop the moon from colliding with Termina. Once Majora's Mask discards the Skull Kid and enters the moon, the Four Giants are no longer enough to stop it but manage to hold it off until Link is victorious against Majora.

After the battle is over, the Four Giants tell the liberated Skull Kid that they never forgot about him, that they always considered him their friend. Afterward, the Four Giants cry out the Oath to Order as they return to sleep in the four regions once more.