From Zelda Dungeon Wiki
Jump to navigation Jump to search
Want an adless experience? Log in or Create an account.
Romani 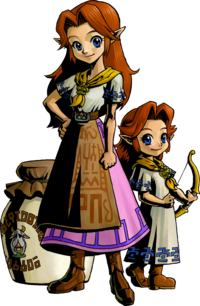 Romani is a female character from Majora's Mask. She is the younger sister of Cremia and runs Romani Ranch along with her older sister. Romani is the Terminian counterpart of Malon from Ocarina of Time.

Romani is a young girl about the same age as Link at the time of Majora's Mask. She likes to refer to herself in the third person; and to give people she knows nicknames, rarely referring to them by their real names, such as giving Link the nickname "Grasshopper".[1]

After Link destroys the boulder blocking the Milk Road to Romani Ranch and reaches the Ranch on the First Day, Romani will speak of a threat from mysterious ghostly beings she simply refers to as "Them", which she suspects will try to kidnap the cattle in the middle of the night. She spends most of her time preparing to defend Romani Ranch from "Them"[2], although Cremia thinks that Romani is just making up stories[3]. The beings come around the same time as the Carnival of Time every year.[4] If Link talks to Romani while she is practicing her technique, she allows Link to use Epona to practice Horse Archery in a mini-game. If Link succeeds, Romani teaches Link Epona's Song, which she refers to as "Romani's Horse-Calling Song".[5]

After completing the training, Romani asks Link to help her defend Romani Ranch. "They" come at 2 AM on the First Night. Link must then protect the cattle until the morning. Using the Bow and Arrows is suggested, as well as the Bunny Hood for increased speed for getting around the barn, as the aliens will be attacking from every side. The "Inverted Song of Time" will slow down "Them" substantially; however, it also means that the flow of time slows, making the encounter several times as long.

If Link succeeds in defending the Ranch, Romani gives Link a Bottle filled with Romani Ranch Milk as his reward for being a "little hero" and saving the cattle from abduction. However, if Link fails or does not help, she is captured by the aliens along with the cows. If this happens, Cremia is left distraught at not believing her[6]. Romani subsequently reappears at the edge of the ranch at dawn on the Second Day, where she wanders about unresponsively in a daze. By the Final Day, she remains heavily traumatized, but can be found sitting near the barn; she has no memory of "Them" but will vaguely respond to prompting from Link.[7][8][9]

If Link succeeds in defending the Ranch, Romani asks Link to live at the ranch and be their bodyguard.[10][11]

When Cremia prepares her milk delivery Chateau Romani to Clock Town for the Carnival of Time, Romani is forbidden from going with them[12]. She has never been to the Carnival and desires to go.[13] More generally, she wishes to be seen as an adult in Cremia's eyes and if certain conditions are met, this wish will be fulfilled; as her sister allows her to become an adult by giving her Chateau Romani and making her a Romani's Mask[14][15] on the night before the moon's fall. She doesn't fully understand her sister's reasoning behind this[16], since she doesn't comprehend what is about to happen.

If all goes well, she can be seen training again in the end credits, with Cremia cheering her on.