From Zelda Dungeon Wiki
Jump to navigation Jump to search
Want an adless experience? Log in or Create an account.
Cremia 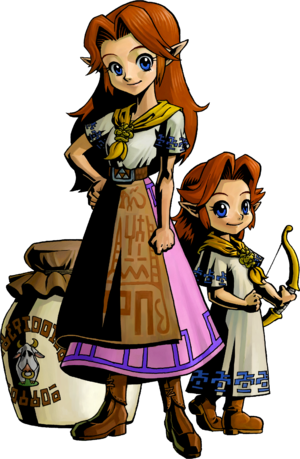 Cremia and Romani from Majora's Mask

Cremia is a character from Majora's Mask. She is the older sister of Romani and runs Romani Ranch along with her younger sister.

Cremia is Romani's older sister and manager of Romani Ranch.[2] She runs most of the operations at Romani Ranch, such as tending the cows and delivering Chateau Romani to the Milk Bar. Romani Ranch directly competes with the Gorman Brothers for milk sales in Clock Town. Due to Cremia's father breeding cows who produce superior milk, the Gorman Brothers resort to banditry to monopolize their milk in the area, and attack Cremia's deliveries.[3][4][5]

Romani has witnessed the cows of Romani Ranch being abducted previously during the same time of year, and warns Cremia of the impending attack, however, Cremia doesn't believe her.[6] If Link fails to defend the Ranch against "Them", then Cremia will appear to be grieving for not believing Romani sooner.[7]

If, however, Link succeeds at defending the ranch, the next day Cremia will prepare to make a delivery to the Milk Bar. She invites Link to tag along, as she normally has company for the delivery ride.[8][9] Due to the Gorman Brothers blocking Milk Road, she has to make a detour through the Gorman Racetrack.[10] Gorman Brothers pursue and attempt to steal the milk.[11] If Link successfully defends the cart against the brothers, she gives Link the Romani's Mask, a sign of membership for the Milk Bar that she makes herself.[12][13] Though the Romani's Mask is intended for adults only, the Happy Mask Salesman and The Bombers, when talked to with the mask equipped, say that the mask isn't necessarily a sign of age, but rather maturity and state that Cremia must view Link as mature.[14][15][16]

If Link has already aided Romani in defending Romani Ranch against strange aliens known as "Them" on the First Day, Link will be able to aid Cremia on her milk run in the Night of the Second Day.

She will attempt to transport bottles of milk to Clock Town, but the main path back to Termina Field is blocked off by a fence. This forces the two to instead ride through the territory of the Gorman Brothers who, wearing Garo's Mask on their faces, chase Link and Cremia and are trying to destroy the three milk bottles.

If Link is able to defend Cremia and the milk with his bow for the first time, she will thankfully reward him with Romani's Mask. This mask gives Link the opportunity to enter the Milk Bar at night. Inside the bar Link will meet Gorman - the third brother, who did not attack Link - beside other characters. If Link helps Gorman, he will be rewarded with the Troupe Leader's Mask, which is always crying and let's characters respond emotional on Link. Wearing this mask while defending Cremia from the Gorman Brothers a second time will prevent the two brothers from attacking.

In later cycles, Cremia will recognize that Link already possesses the Romani's Mask. With nothing else to give him as a reward for helping her make the delivery, she will reward him with either a Gold Rupee, or a really big hug.